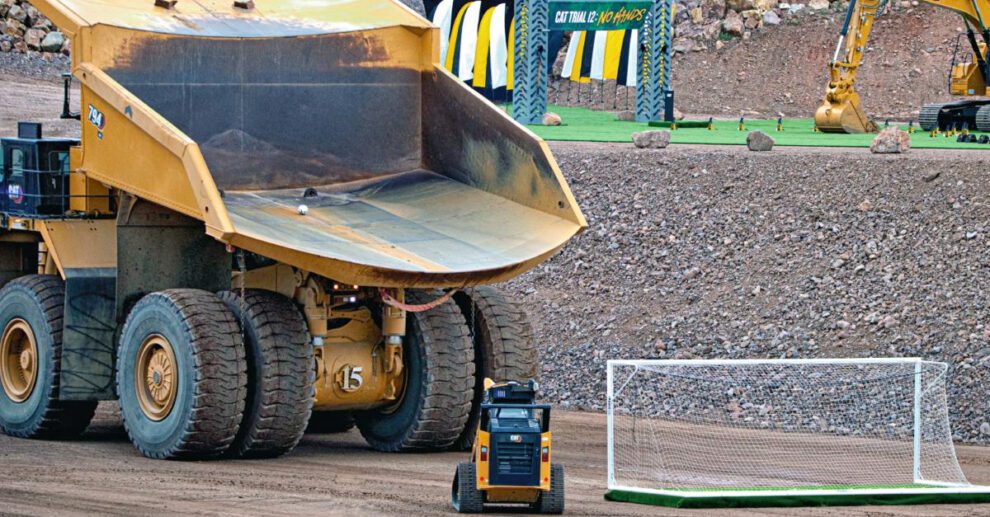 An autonomous heavy vehicle successfully completed an obstacle course with a roaring finish.

One autonomous dump truck recently showed it was nimble enough to overcome a series of challenges and still deliver the payload.

Caterpillar shared footage of the CAT 794AC weaving through several banquet tables set with plates, cutlery and wine glasses. The truck twists through more teardrop banner clusters before reaching the bottom of the pit.

The truck empties its tray contents, rolling the ball into a soccer goal that a CAT 299 D3 semi-autonomous compact track loader moved into place.

“The precision assist you need to take your best shot,” the caption said in the video.

The stunt was part of the so-called CAT Trial 12 called “no hands”, which aimed to showcase the heavy vehicle’s driverless capabilities.

“You want a job site that is as safe and productive as possible. At Caterpillar that means a focus on autonomy,” the company said in a public statement.

“In Cat Trial 12: No Hands you will get to see the agility and precision our autonomous mining trucks bring to the table, not unlike what you would see from a world-class soccer player.”

This is not the first time the company used an obstacle course to demonstrate products. Cat Trial 3: China Shop previously tested a mini excavator’s ability to navigate through glassware worth “tens of thousands of dollars”.

“We wanted to show that our big machines could do it too,” the company said.

“We know you will get a kick out of how it all comes together.”