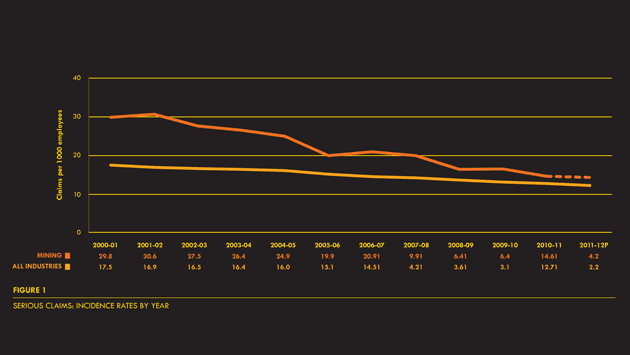 The preliminary data for 2011–12 shows there were 3,365 successful workers’ compensation claims for serious injury or illness. Over the five years from 2007–08 to 2011–12, the mining industry accounted for 2% of all serious workers’ compensation claims. On average there were 8 claims each day from employees who required one or more weeks off work because of work-related injury or disease.

Figure 2 shows the incidence rates of serious claims in the mining industry by jurisdiction.

The preliminary data for 2011–12 show that New South Wales recorded the highest incidence rate with 22.9 serious claims per 1000 employees and South Australia recorded the lowest with 9.2.

Figure 3 shows the incidence rates of claims involving 12 or more weeks off work by jurisdiction.

Preliminary data for 2011–12 show 25% of serious claims had compensation paid for 12 or more weeks off work.

Over the period 2007–08 to 2010–11 all jurisdictions except South Australia and the Northern Territory recorded falls in the incidence rates of long term claims. Queensland recorded the largest decrease (43%) followed by New South Wales (27%). In contrast, incidence rates of long term claims have more than doubled since 2007–08 in the Northern Territory and South Australia.

The preliminary data for 2011–12 show that incidence rates of long term claims ranged from 1.7 claims per 1000 employees in Victoria to 4.4 in the Northern Territory.

Claims data were extracted from the National Data Set (NDS) for Compensation-based Statistics. The data presented here are restricted to accepted claims for serious injury and disease. Serious claims include fatalities, claims for permanent disability and claims for conditions that involve one or more weeks of time lost from work. Serious claims do not include those involving journeys to and from work. The 2011–12 data are preliminary and expected to rise. As such they have not been used to determine the percentage change in rates over time. More information on this industry can be found at swa.gov.au. 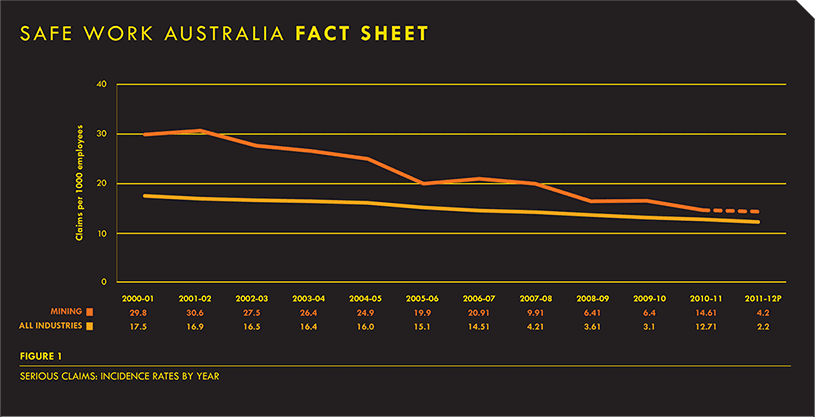