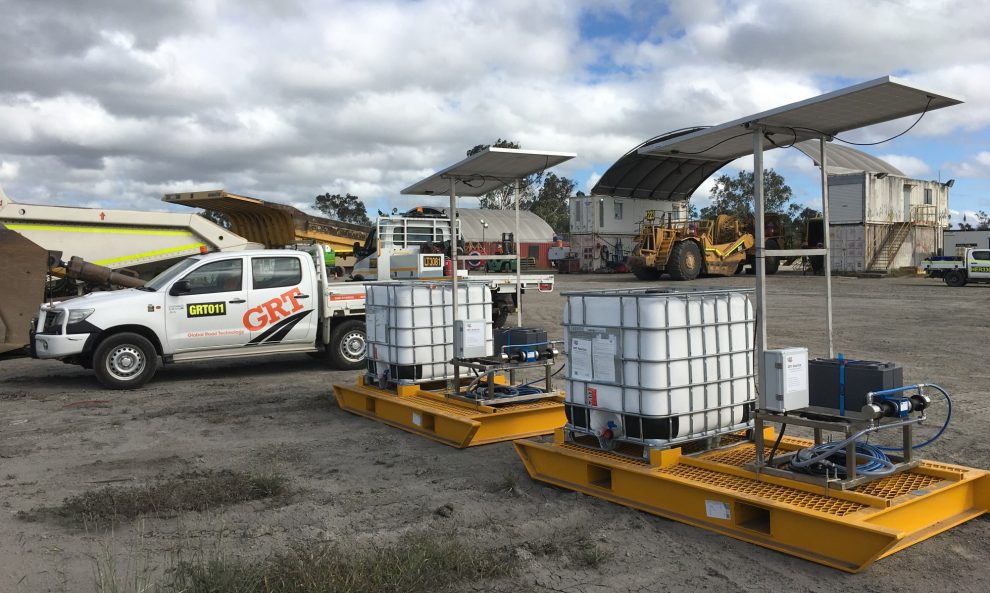 Recent national legislation means that the issue of mine site dust control and air quality around mining communities are firmly back on the national agenda and dust suppression specialists Global Road Technology (GRT), are providing miners turnkey solutions to protect both workers and residents alike.

Coal mines alone are responsible for almost half the nation’s total coarse particle (PM10) emissions each year (these are relatively large airborne particles mainly produced by the mechanical break-up of even larger solid particles caused by mining activity), with emissions doubling in the last five years alone. However, this issue is not limited to one type of material with Iron Ore, Zinc, and Copper mines all contributing to increased particulate matter around the mines themselves and across the neighbouring communities.

However, the challenge lies in the fact that mining represents one of the single most critical sectors within the Australian economy representing a 10.4 per cent economic contribution to the nation valued at $202 billion per annum.

As a world leader in the development of infrastructure and process solutions for the mining, civil and agricultural sectors, one of GRT’s core areas of competence is in developing and implementing total mine site dust mitigation programs. They achieve this by using highly advanced, biodegradable, and non-toxic chemical applications alongside advanced engineering techniques to stop the spread of dust.

It is within this context of balancing environmental challenges with economic benefits that GRT operates and according to its General Manager, Daniel Grundy, has made it a mission to ensure that a balance can be struck between protecting people and ensuring work can continue unimpeded for the purpose of protecting livelihoods.

“One of the core challenges facing the sector when it comes to coal dust suppression is that traditional methods used to mitigate the generation and spread of hazardous particulates are, in some instances still stuck in the 20th century,” said Mr Grundy.

‘Miners traditionally use water-based methods employed to mitigate the generation of coal, silica, and other hazardous dust however this is ineffective due to the water’s chemistry, while also being wasteful due to the amount of continual watering required to try and manage mining dust. That’s why we are so passionate to showcase that by utilising our product suite and engineering techniques you can control the spread of harmful dust particles enough to reduce the impact on people and communities – this then allows this vital economic engine to continue to propel our economy.”

This is to protect workers, nearby residents, and landholders from airborne dust pollution and disease. Working with CQ Dust Suppression, GRT has also launched 2 new products for drill and blast dust control – GRT: 12X and GRT DC Binder.

These new products prevent the generation of dust by super-activating the water used in drilling and binding the surface of fine drill cutting piles to prevent them from producing airborne dust.

Representing the apex of six years of research and development, these Australian-made products change the surface tension and charge of the water, so that it attracts and captures dust particles, which then simply drop to the ground.

They highlight the significant investment in research and development made by GRT to ensure it is an industry leader in the area of dust suppression.

Its leadership in this space coming at a time when the company is experiencing rapid growth due to the national tightening of legislation in the wake of recent deaths from silicosis and CWP caused by airborne diseases.

This national tightening of legislation is best highlighted by new controls enacted in Queensland via Recognised Standard 20 that focuses on dust control in surface mines, as respirable dust is one of the main health hazards for coal mining operations.

According to GRT, these developments are all working to create a sharper focus on what needs to be done to protect workers to ensure that these economically vital activities don’t encounter greater community or political resistance.

“Mining and the health of communities do not need to be a zero-sum game where it’s one or the other,” Mr Grundy said.

“Our focus and that of the industry needs to be on implementing the controls to the highest standards to protect workers and allow the mining industry to continue to grow the economy while providing vital regional jobs. That’s why we’ve invested so heavily in the area of mitigating dust pollution as we see it as vital for the continuation of the social licence miners rely on to conduct their activities.”