AMSJ » $150K for the death of mineworker in a gantry collapse 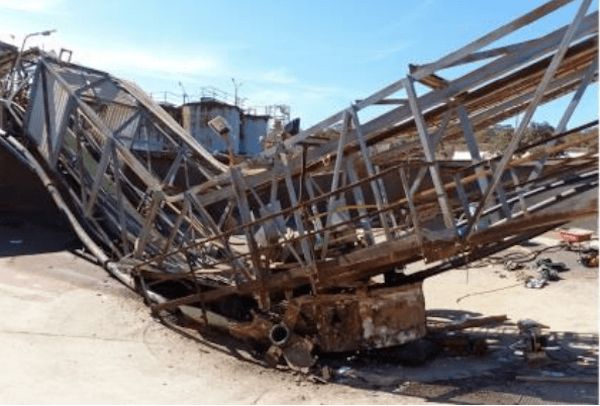 Central Norseman Gold Corporation has been fined $150,000 over the death of a worker who was crushed by a bridge at the company’s Norseman gold mine processing plant in 2016.

The Kalgoorlie Magistrates Court heard that Lindsay Bridges was fatally crushed on 26 July, 2016, when a corroded gantry bridge collapsed on him while he was working beneath it.

Back in 2016, Mr Bridges was working inside a thickener tank during a site shutdown. He died when the gantry above him failed and collapsed, crushing and pinning him against a concrete floor. The worker had been tasked with removing the thickener’s rake shaft in the centre of the tank.

As he stood on the tank floor, cutting into the rake shaft, the gantry failed and collapsed

However, the bridge structure had been corroded to such an extent that the bridge was being supported by the rake shaft, collapsing as he was attempting to remove it.

He died from his injuries while being transported to the hospital.

Andrew Chaplyn, Mine Safety Director at the Department of Mines Industry Regulation and Safety, said “CNGC was aware that its processing plant was old and was in generally poor condition,” he said.

“If CNGC had implemented, maintained and enforced an appropriate system of work, a structural integrity review, or a thorough condition assessment of the bridge would have been undertaken before Mr Bridges was tasked with removing the rake shaft.

“The condition assessment would have determined that the bridge’s bottom truss chords had corroded and fractured, and there was a risk the bridge was in danger of sudden collapse if the rake shaft was removed.

“This tragic consequence of the company’s lack of attention to an issue, which should have been identified, highlights the need for vigilance by management in ensuring that safety protocols are strictly observed.”