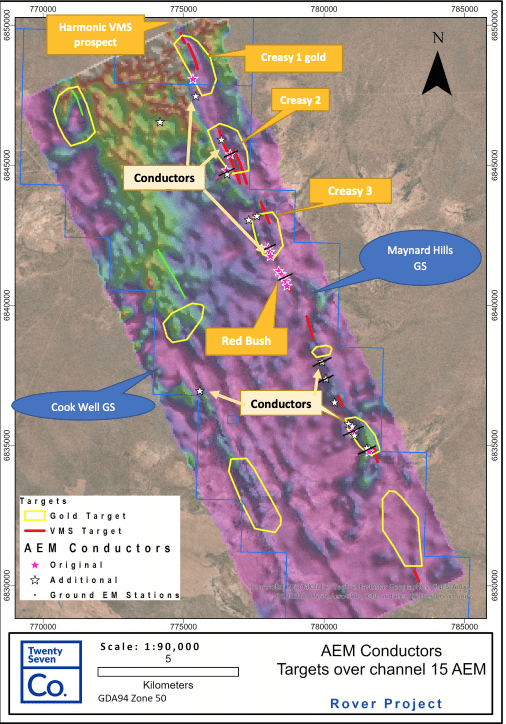 TSC Limited (“TSC” or “the Company”) is delighted to announce that its recently completed airborne electromagnetic (AEM) survey has identified 27 conductors from the final processed data within the southern half of the Rover Project. The vast majority of the conductors are situated along the 20km long prospective gold strike that is part of the Maynard Hills greenstone belt (Figure 1).

CEO Ian Warland commented: “Without doubt, the final AEM survey results have significantly surpassed expectations, with a substantial 27 conductors to follow up at the Rover Project. To maintain exploration momentum, TSC has contracted a GEM crew to survey the most promising AEM conductors so that high-quality test-drill targets can be finalised for future drilling campaigns. With the second RC drilling program complete, TSC is now eagerly awaiting assays and GEM results which will determine next steps.”

The final data from the AEM survey, facilitated by New Resolution Geophysics’ advanced Xcite system, has now been analysed by TSC’s consultant geophysicist. This has resulted in an additional 14 AEM conductors being identified, taking the total to a substantial 27. Notably, 25 conductors are located along a 15km stretch of the Maynard Hills greenstone belt, one conductor is located on the Cook Well greenstone belt and one is located in granitic rocks between the greenstone belts (Figure 2).

The bulk of the conductors have been grouped into five areas sequentially from north to south, including:

Significantly, during processing of the final data seven additional conductors were identified southeast of Red Bush along the Maynard Hills greenstone belt. This exciting development provides extensive additional exploration upside to an area that is mostly under shallow cover and poorly explored.