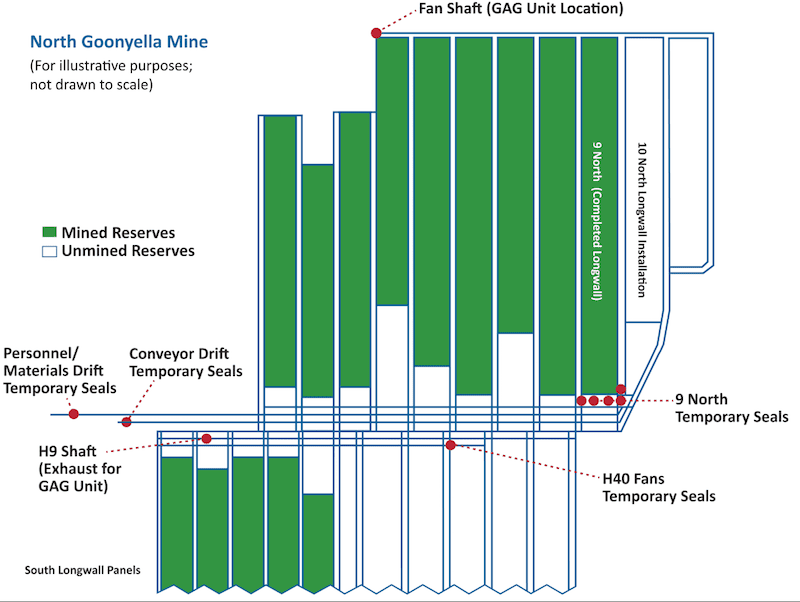 Peabody Energy’s North Goonyella mine have confirmed the value of equipment losses from the sealing of mining equipment underground due to the mine fire.

In a media release, Peabody advised investors that it has recorded a $49.3 USD (approx 68.5M AUD) million charge for estimated equipment loss, including 78 shields and ancillary equipment sealed in the completed 9 North panel area.  The majority of this charge is expected to have a cash impact related to leased equipment.

The mining giant also confirmed that it estimates $20 to $25 million in containment, monitoring and planning costs, along with approximately $15 to $20 million in costs to keep the mine in idle status pending any future re-entry.

Peabody have also advised that mine personnel are continuing with concrete sealing of the completed longwall panel, and the company is transitioning to the assessment/planning phase of managing the previously reported incident at North Goonyella.

This next phase involves mapping of the heated area and monitoring of temperatures, gas levels, seismic activity, surface air quality and camera imaging.  These actions come before advanced planning for re-ventilation, mine re-entry and potential restart of operations.

Continuing analysis is based on a network of 25 planned, remote gas monitoring points throughout the mine.  The GAG Unit that was initially used in the inertization of the underground environment has been deactivated and on stand-by mode for nearly two weeks.  With no ventilation or water management at present, the underground air quality is inert and there are indications of standing water in portions of the mine, with pumping being planned from the surface.

Financial Elements:  Consistent with actions taken and conditions known to date, Peabody has recorded a $49.3 million charge for estimated equipment loss, including 78 shields and ancillary equipment sealed in the completed 9 North panel area.  The majority of this charge is expected to have a cash impact related to leased equipment.

In the fourth quarter, Peabody estimates $20 to $25 million in containment, monitoring and planning costs, along with approximately $15 to $20 million in costs to keep the mine in idle status pending any future re-entry.  The company intends to take all steps to work safely, progress the plan and look to mitigate costs while pursuing options for a resumption of activities at the appropriate time.  Mitigation actions under consideration include pursuing means to access a small quantity of metallurgical coal remaining in the stockpile, subletting excess rail and port capacity for a limited time, and analyzing reprocessing of coal waste for potential sales into the thermal market.

Regarding insurance coverage, the company has notified its carriers of a potential claim under the company’s insurance policies that hold a relevant coverage limit of $125 million above a deductible of $50 million.

Future Scenarios:  As Peabody enters the next phase, the North Goonyella team will continue to work from the surface and obtain greater knowledge of underground conditions in the mine.  The assessment and planning phase comes before re-ventilation, re-entry and any potential restart of operations.  All phases involve review and collaboration with the Queensland Mines Inspectorate.

Multiple scenarios are being evaluated should mining be able to resume.  If the next panel (10 North, which is already developed) is accessible, production would be targeted for the second half of 2019, whereas southern panels (GM South) access would likely extend to 2020 given that development was in early stages.  The company is exploring all reasonable mine-planning steps given the long-lived nature of reserves and compelling margins of the mine during times of strong industry conditions.