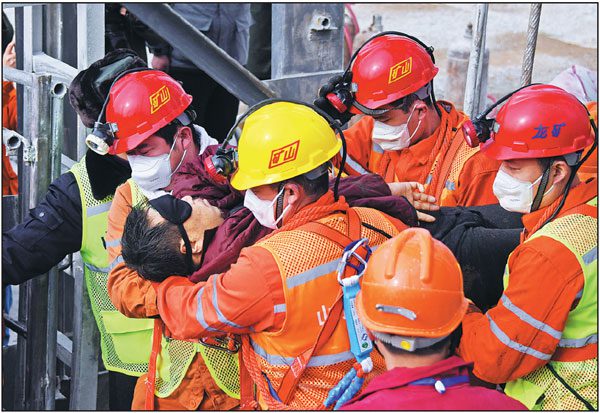 Two weeks after an explosion at an underground gold mine in Shandong, China, a rescue team has pulled eleven gold miners to safety. A twelfth miner is believed to be trapped on his own, 100 metres further down the mine in rising flood waters. The situation of ten other mineworkers, who were still underground is uncertain. Rescuers have not been able to make contact with the ten since the explosion.

One worker was seriously injured after the explosion and has now been confirmed dead after suffering head injuries and falling into a coma during the two-week long ordeal.

State broadcaster CCTV showed numerous ambulances parked alongside engineering vehicles at the mine in Qixia in Shandong province. The first miner brought to the surface at about 11 am, was rushed to hospital in “extremely weak physical condition”, CCTV reported.

Rescue teams have been battling difficult conditions to help the workers since the explosion sealed them underground amid rising waters on 10th January. The explosion occurred in the air ventilator shaft, causing a blockage that damaged the cable car that allowed miners to ascend.