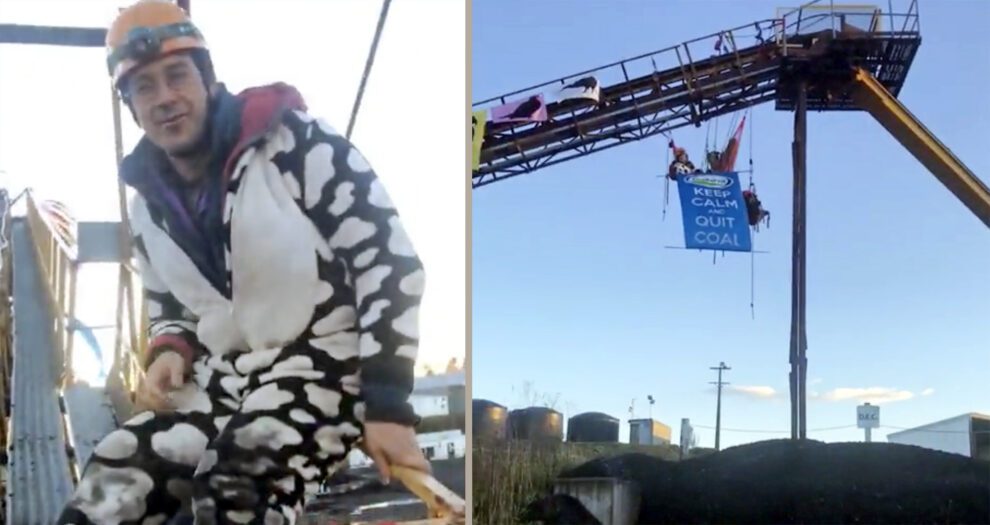 Environmental activists risked their own safety to oppose a new mine expansion.

Extinction Rebellion supporters Michael and OJ thought it was a great idea to lock their limbs, and precariously hang high above the ground from a coal sorting conveyor.

Footage shared on social media shows the pair used a hammock, harness and banner to urge the nation to “keep calm and quit coal”. Others sat on top of wooden towers to block the mine entrance. The stunt was meant to oppose Bathurst Resources’ recently approved Takitimu Coal Mine Expansion, 156km southwest of Queenstown.

“I am just in place, making it really difficult for anyone to get up and remove those beautiful two climate-activists,” Michael can be heard saying in the video.

He also showed no concern for the safety of himself or others at the work site.

“Everyday people can actually just step in, put their bodies on the line and stand up for what is right,” he said.

The group of 30 arrived at the mine about 3am on 2 May 2022, and police confirmed the last protestor left at 5:45pm the same day. No arrests were made.

“We will continue to monitor the situation and will respond should the need arise,” a police spokesperson said according to Stuff Limited.

Student OJ defended his unsafe behaviour by claiming he learnt more about ecology during the protest than in a classroom.

“Learning about this climate crisis is not enough, it is probably better to be here,” he said.