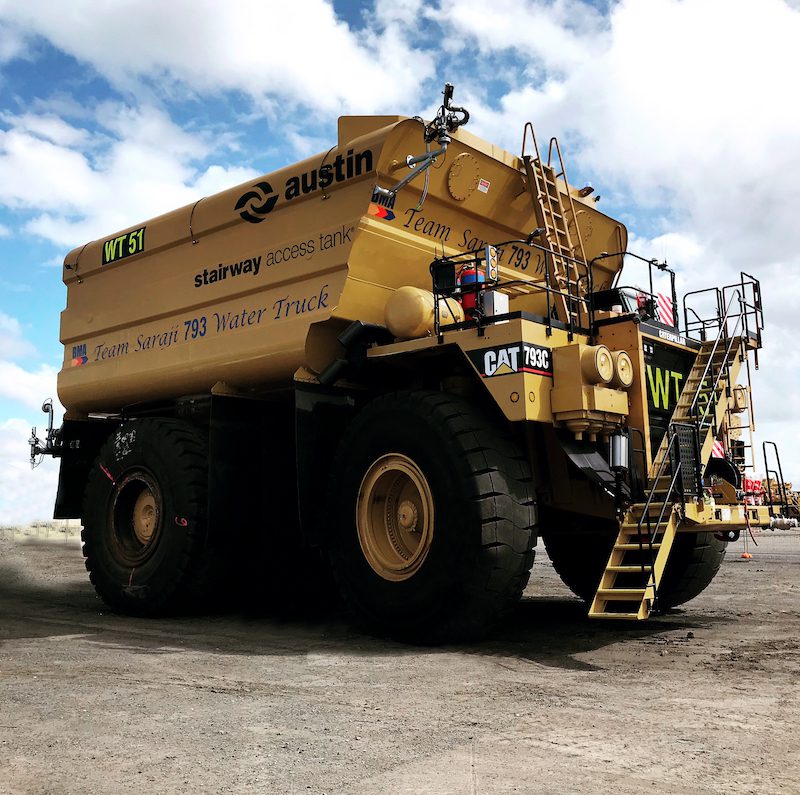 An Australian manufacturer has developed a locally made water tank which aims to improve safety during confined space entries.

Austin Engineering has commissioned the first of its locally manufactured high-performance truck-mounted water tanks.  The result of a significant re-design process, the new Stairway Access Tank (SAT) includes a number of features to improve efficiency, operator safety and truck stability.

Custom-built to suit most haul trucks, the new SAT starts at 14,000 litre capacity and includes all spray equipment along with the company’s unique ‘Water Wise’ system.

The first tank off the production line has a 198,000 litre capacity fitted to a CAT 793C haul truck and is claimed, by the manufacturer, to be the biggest water truck in Australia.

The most obvious external feature of the Austin Engineering water tank is a stairway from the top of the tank structure down to a large (137cm x 259cm) access port for easy entry and exit for personnel and maintenance equipment to the tank interior.  The fill port is located behind the water dam to ensure any overflow flows away from the cab and deck to the rear of the truck.

Inside the tank, the unique design of the new Austin SAT directly tackles the safety concerns surrounding the confined workspace in mine site water tanks, addressed by a recently-completed 10-year study by the US-based National Institute for Occupational Safety and Health (NIOSH).

Part of the study looked into operator access to the tank and ease of movement once inside.

Traditional access inside the tank has been through a series of semi-circular portholes in the baffle system which, although adequate, slowed access and movement, especially in the case of an emergency.  The diameter of the portholes – generally 60cm (23”) wide x 74cm (29”) high – also restricted operator maneuverability and the physical size of any equipment that could be used inside the tanks.

The new SAT from Austin features a series of oversize rectangular access ports – 63cm wide x 155cm high  – throughout a unique baffle system to replace the traditional portholes and significantly improve operator safety and comfort inside the tank.

The engineered corrugated baffle system, which interlocks the baffles for increased structural integrity, controls both transverse and longitudinal water surging and reduces the overturning forces by 19% to improve truck stability.  Maximum overturning force is delayed by about one second – providing an increase in the time to react to any side force.

The design of the corrugated baffle system also allows for a lighter-weight tank, which translates to additional payload and less operating cost.  Additionally, the alignment of the oversize access ports, combined with the horizontal baffle system, gives unobstructed movement within the tank.

To improve the worksite environment inside the tank during maintenance periods an air exchange system has been developed for the tank.