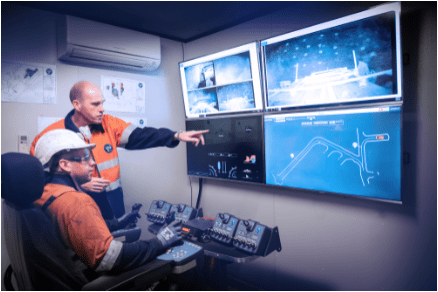 Barminco has successfully piloted a new remote operations centre that allows it to remotely operate underground equipment on a client’s mine site anywhere around the world.

In what the company believes is a world first, Barminco operated a machine, working underground, from its head office in Perth at a client mine site in the Goldfields.

The innovation was made more impressive given the remote operation occurred via the internet, instead of through a fibre-optic cable, which is the method that mine owner-operators have historically used.

“Barminco has cemented its place as one of the world’s leading underground mining service providers through the use of technology and automation,” Mr Muller said.

“A key strategic initiative under our parent company, Perenti’s 2025 strategy, is to deliver a ‘technology-driven future’, and our ability to remotely operate underground machinery from our head office is a significant achievement in delivering on that strategy.”

The Barminco Remote Operating Centre (BROC) was successfully trialled in collaboration with Sandvik and Independence Group NL (IGO) back in July of this year.

The new system was trialled at Barminco’s Head Office in Hazlemere (Perth, Western Australia) for a machine located at IGO’s Nova Minesite, almost 1,000 kilometres away.

“Whilst many mine sites have operators remotely operating equipment from the mine’s surface, we are one of the first, if not the first service provider, to operate underground equipment on a client’s site from a much greater distance,” Mr Kwok said.

“BROC enables us to connect multiple sites and operators at the same time, meaning if there is an issue at any point, we have contingencies in place.”

Barminco’s first trial involved the remote operation of a Sandvik LH517 loader being operated in Perth by Barminco employee, Guy Gilbert, and Mr Kwok said Barminco was now working with IGO to make BROC a permanent fixture at their Nova mine site.

“The advantages in improving the safety of our workplace and the efficiencies for our clients are enormous,” Mr Kwok said.

Independence Group Chief Operating Officer Matt Dusci said the Company was thrilled to be part of the successful trial.

“At IGO, we continually look for ways to improve how we do business and deliver operational excellence. By integrating innovative SMART solutions at our operations, such as working with Barminco on BROC, we improve the safety and wellbeing of our people, realise step change opportunities, and optimise efficiencies and productivity,” Mr Dusci said.

“Our future plan is to have a dedicated remote operating centre manned 24/7 where our team and our client’s people can work collaboratively side by side to deliver a world class mine-site,” Mr Kwok said.

“Clients who work with Barminco should expect more from our business along with the broader Perenti group of companies and BROC is one such example of how we are delivering on this promise.”

The Sandvik event concludes tomorrow and showcases best practice examples of industry leaders integrating digitalization into their operations across the mining, construction and quarrying industries.

The announcement comes just over a week after Barminco was awarded Large Employer of the Year 2019 at the National Australian Training Awards in Brisbane.

The award acknowledges a company which is focused on upskilling and advancing its employees and we were recognised for our leading focus on ensuring our employees are the best they can be.