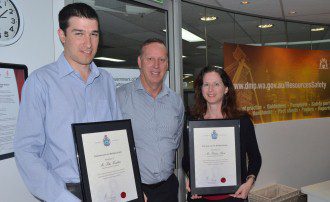 Two Department of Mines and Petroleum Dangerous Goods Officers have been recognised by the Western Australian Police for their ongoing contribution to road safety.

“Every day there are thousands of vehicles transporting dangerous goods on the State’s roads,” Mr Stidolph said.

“The work of Kristin, Peter and the entire Dangerous Goods branch in education and enforcement has a significant impact on road safety in Western Australia.

“Their recognition also highlights the multi-agency approach that is so vital to road safety in this state.”

Ms Priest said it was quite a thrill to be recognised and it meant a lot coming from such a respected agency.

“However, such recognition would not be possible without the support we receive from our colleagues,” she said.

Mr Xanthis said he was also grateful for the recognition which reflected on the good work by the whole Dangerous Goods branch.

“Not only has internal support been critical, but also the support of organisations such as WA Police,” Mr Xanthis said.