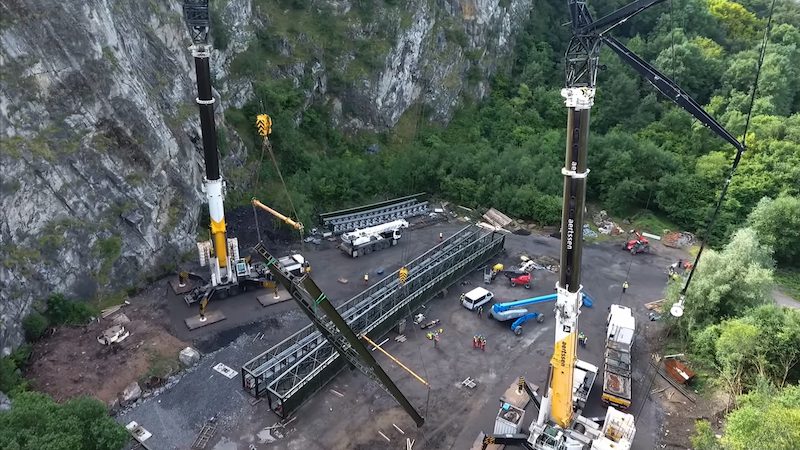 Using remote-controlled drone technology over building sites or quarries? That might sound futuristic –  but it’s not. Equipped with cameras, unmanned aerial vehicles are part of the everyday business for the planning, execution and documentation of construction projects, for example for belt conveyors that cover several kilometres.

The use of drone technology is reported by BEUMER experts Eugen Doberstein and Lukas Paul in this interview. Drones are becoming increasingly important, particularly in difficult-to-access areas and building sites.

Mr. Doberstein, since when does BEUMER Group use drones on building sites and what role do they play in your daily work?

Eugen Doberstein: We have been working with drone technology for about three years now. In this industry, drones have become standard equipment – whether it is for measuring construction sites or for operating and maintaining facilities. One of the main reasons for the increased use are the higher standards in occupational safety: only a few (or even no) people are on-site and could be exposed to possible hazards. In general, the use of these aerial vehicles is becoming more and more important for many companies in very different industries. We are mainly using these in the area of plant engineering.

Please describe for us the field of application. What are the tasks that you can solve by using unmanned aerial vehicles?

Lukas Paul: If, for example, customers authorize us to supply and install a belt conveyor, we have to submit a detailed quotation beforehand. Here, it is important to assess the project correctly. We usually do not have a lot of time for this.

The use of aerial photographs that are analysed by specialised software provides an effective way to accomplish this. This has made drone technology an important tool for us. They are equipped with high-performance cameras that provide image data that we then use to create a reliable planning basis with our software.

We have, for example, planned and supplied a belt conveyor in Indonesia that transports clinker from the quarry to the cement plant. The route led through the rain forest and was very demanding from a topographical point of view. By means of the drone we were able to work out and compare different routings.

In particular, the very long corridor, i.e. the line on which the conveyor will later run, requires complex project planning. Using the photographs allowed us to recognize, for example, whether the terrain is sloping or whether there are buildings, waterways or a similar obstacle. This allowed us to adapt the routing of the system to environment in an optimum way. If these obstacles are  identified at a later stage, the construction of the conveyor becomes much more complex. Depending on the project size, we later even control the complete construction process by means of the drones – whether in areas that are difficult to access or on building sites that are easier to access.

Of course, there was a time before drones. How were these tasks managed in the past? Did you send out a survey team during the planning phase?

Eugen Doberstein: This was quite common, but it was time-consuming and expensive – and this is a phase in which it is often not yet clear whether the customer will realise the project at all. In the best case scenario, the users know the field of application because they have previously transported bulk material from the quarry to the plant by truck, for example. Then they are able to provide the required data and we can start working immediately. Later, Google Earth was an alternative. The software superimposes satellite and aerial images of different resolutions with geodata and shows this on a digital elevation model of the earth. However, this data is not as accurate and up-to-date as the recordings of a drone, which for example detects whether a new building has been erected or traffic routes have shifted within a mine.

In practical terms, how do your customers benefit from the fact that your team uses drones?

Lukas Paul: They save considerable time and costs. If a customer is not yet sure whether they will proceed with the project, we quickly provide them with precise and low-cost data at the time of the project pre-planning phase by means of drone recordings and our further calculations. On this basis, the customer can make their decision: Is the project worth it or not? But we also benefit from significantly less effort and thus manpower, amongst other things and this is reflected in the costs. Drones are presenting an excellent solution to get a first overview.

How has the drone technology developed over the past years and how difficult is it to control them?

Eugen Doberstein: The technology has become much more mature over the past years. Nowadays, the drones are smaller and their quality improved. In addition to that, the cameras being used are becoming more compact and are delivering increasingly high-quality images. The stabilisation systems have been improved, too.The aerial vehicles are now able to connect to certain satellites and thus access GPS data to maintain their position. Even strong gusts of wind can no longer drive them away. To control a drone is quite simple today. But of course, the employees have to acquire a certain know-how. They can also plan the route with the computer. By using the appropriate software, they calculate the exact flight path. Then, the drone flies its pre-determined route. In order to control the drone, smartphones or tablets can be used.

There are two designs: the copter and the fixed-wing aircraft. What are the respective advantages and for which application are the versions suitable?

Lukas Paul: With regard to functionality and characteristics, the copters are similar to helicopters. With their rotors they can stand still in the air like their big brothers. Fixed-wing aircrafts, on the other hand, are more comparable to aeroplanes. They also have a higher range. As soon as they are in use, they are constantly in motion. Copters are therefore particularly suitable for narrow take-off and landing areas or when they have to perform at low speed. Users can control them manually. They mainly fly over medium-sized and small building sites. In addition, they are used for quarry faces in quarries and construction inspections such as lower sides of bridges. Due to the fact that we only need to measure one corridor for a belt conveyor, we use a copter for our projects. If the route is over several kilometres, as it was the case with the Chinese cement manufacturer Sichuan Yadong Cement with a total length of 13.7 kilometres, we divide it into several segments, as the drone is only able to fly over the route in sections due to its limited flight time.

What happens to the aerial photos afterwards, how are they processed and how long can this take?

Eugen Doberstein: The aerial photos are rectified with regard to their perspective and evaluated photogrammetrically. This means: If we receive photos, the software calculates a point cloud in order to generate 3D models from the two-dimensional views, i. e. digital terrain models. This is decisive for the quality of the work. Depending on the scope of the project, this can take between one day and two weeks.

Which legal and technical framework conditions have to be considered when using drones?

Lukas Paul: In Germany, we have to consider the legal regulations of the aviation law and the air transport authorization regulations. In addition, there is the copyright and data protection law as well as property and personal rights of third parties that does also limit the use of camera-equipped drones. Abroad, however, this is not always clearly defined and can vary from country to country. It all starts with the question are we even allowed to transport the drone in the plane to its destination.