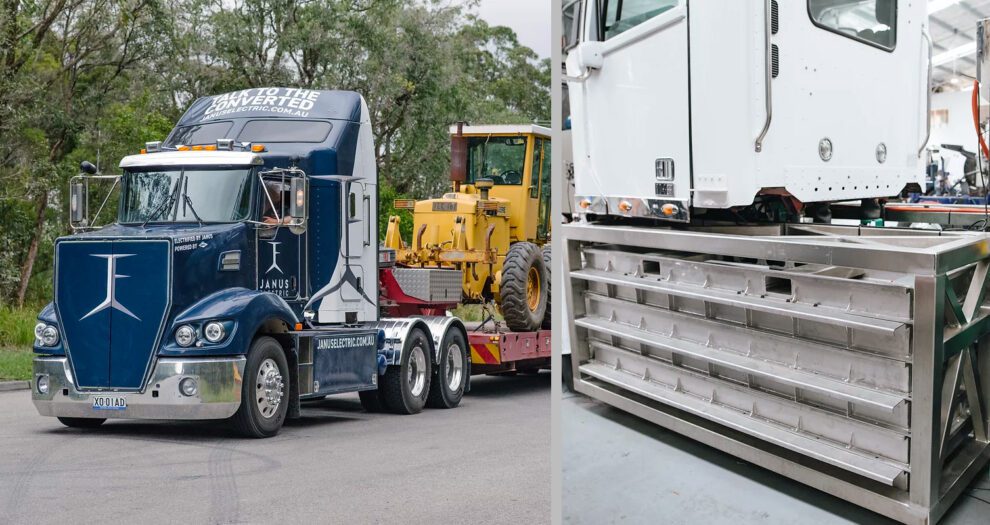 A next generation energy storage company wants every truck in the nation to transition away from fossil fuels and purely operate on electricity.

Central Coast-headquartered Janus Electric has discovered a way for heavy vehicles to make long distance trips even after a full electric conversion.

The company’s so-called “charge and change” stations will let forklifts swap over exhausted batteries with fresh replacements in about three minutes. This means 540 kilowatt (kW) B-double engines could theoretically travel well beyond the usual 400km to 500km range per charge on a 630kWh battery. Smaller and more lightweight trucks could theoretically do 600km each charge.

General manager Lex Forsyth claims the stations will resemble existing Swap n Go gas exchange hubs where empty bottles are immediately replaced with new ones. These stations will have a capacity of about 38 megawatts (MW) with a 20MW feed from the grid. They take about four hours to recharge battery units but can do a “fast charge” with at least 1.2MW of power.

The company is already searching for investors to buy battery units and hire them out to truck drivers.

“A truck comes in, you do not care which battery you get as long as it is fully charged. A battery could belong to Macquarie, it could belong to a super fund,” he said according to Fairfax Media.

The $10.4 million pilot stations are likely to be privately funded due to an “extremely” disappointing lack of interest from state and federal governments.

“They seem to be looking at hydrogen as the only solution,” Forsyth said according to the media outlet.

“I really question our government’s true integrity around carbon zero and the seriousness of it, because it can be done right here and now.”

Trials are already underway with Oz Minerals and Qube using the technology to transport copper concentrate in South Australia. The proposed station network is expected to be operational sometime in late 2023 or early 2024.

Forsyth believes there is a real opportunity for electric conversions since most heavy vehicles need a major engine rebuild at the 1M kilometre mark. The technology can be retrofitted to Freightliner, Kenworth, Mack, Volvo, Western Star and other makes.

“This provides an ideal opportunity to convert to electric,” he said according to The Driven.

“Electrifying our road network is no longer a pipe dream for future Australia but a real tangible solution … that we can act on now.”

The technology is promised to deliver a 191 per cent return on operating costs. This is calculated based on the claim it costs 33 cents per km to operate the electric truck compared to 96 cents per km for diesel-powered vehicles. Batteries can also be recycled for stationary storage once their charge depletes to about 70 per cent.

If a standard conversion costs about $150,000 and a standard B-double has an onboard tank capacity of 1010 litres, AMSJ understands an electric B-double would take about 226 complete recharges to achieve a return on investment.