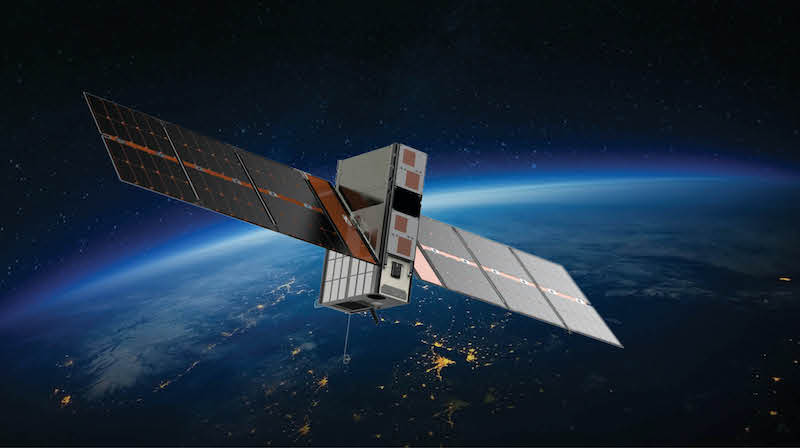 Adelaide satellite manufacturer Fleet Space Technologies has applied for a $5 Million Federal government Modern Manufacturing Initiative (MMI) grant so that it can jump from building three hand-built nanosatellites a year to mass-producing 50. Additional support from the South Australian government will supplement nearly $4 Million the company is raising itself.

If the grant application is successful, Fleet Space will become a major satellite manufacturing hub and increase its payroll from 31 staff today to 128 by 2024, says its CEO and co-founder Ms Flavia Tata Nardini.

Most of the new employees will be engineers and specialist satellite assembly technicians.

Fleet Space has spent $12 Million since 2015 on R&D to develop the world’s most advanced beam-steering antenna and to miniaturise its satellites’ communications payload. These make it possible to deliver its Nebula space-based data network using a 10kg nano satellite where previously this level of connectivity was only possible with a 100kg satellite.

The company, which has already launched four nanosatellites, has applied for a $5 million grant under the Department of Industry, Science, Energy and Resources’ Modern Manufacturing Initiative (MMI) to help it make the jump. Fleet Space plans to build a new factory with more than double the space for R&D and manufacturing and has partnered with the University of Adelaide’s Institute of Photonics and Advanced Sensing, local company Redarc Electronics, Hawker Richardson in Melbourne and NSW-based Lintek to build the industrial capability to manufacture these nanosatellites in Australia.

The Nebula service for utilities, mining and energy companies uses satellites to connect sensors monitoring critical infrastructures such as remote mine sites, alternative energy sites, gas pipelines and rurally dispersed electricity pylons with central base stations, 24 hours a day. This also allows operators to conduct geological surveys and operate unmanned vehicles such as drones remotely from a proper control centre, rather than having to visit a distant, inaccessible site.

This is the Industrial Internet of Things (IIoT) and it’s transforming the ability of Australian companies to manage and control remote assets in real-time, says Ms Tata Nardini. The full constellation of 140 nanosatellites could generate a lifetime revenue of $1.82 billion, she estimates.

The heart of Fleet Space’s 10kg Centauri-series satellites is its Nebula System, consisting of the smart, lightweight, low-power communications payload and antenna, ground-based Portal satellite modem and the Nebula Network Management System. The company designs all of these, including the advanced on-board Artificial Intelligence system that manages them, itself in Adelaide. However, it is forced to get the antenna and some of the complex electronics manufactured by space-qualified specialist suppliers in Switzerland.

In order to achieve seamless global coverage, the company needs a constellation of 140 satellites in Low Earth Orbit (LEO). Up to 50 will need to be replaced each year due to the rate of orbital decay associated with LEO as well as battery and solar panel degradation. The fifth satellite in Fleet Space’s constellation, Centauri 3, will be launched from New Zealand in just days, with two more scheduled for launch this year and 16 in 2022-23.

“At present, every satellite launched by an Australian company is hand-made, and many of the components come from overseas,” says Ms Tata Nardini. “Our manufacturing rate is very low. Australia lacks many of the manufacturing capabilities its industry needs to build satellite payloads and the satellites themselves. And we certainly can’t produce them in volume.”

“We want to establish these manufacturing capabilities here in Adelaide so that we can kick-start Australia’s space industry.”

As well as high-precision 3D printers, with trained operators, Fleet Space needs to be able to design and prototype complex PCBAs up to 26 layers deep. The best that Australian firms can do at present is 12 layers. Fleet Space currently gets its complex PCBAs manufactured overseas and much of its pre-launch testing must be done overseas too.

“Winning this grant would mean Fleet Space and its partners can develop and manufacture the smartest parts of future satellites right here in Australia and provide an Australian service to a worldwide customer base,” says Ms Tata Nardini. “Only a handful of companies worldwide such as SpaceX and Airbus have the capacity to mass-produce satellites. We can join them if we move quickly.”