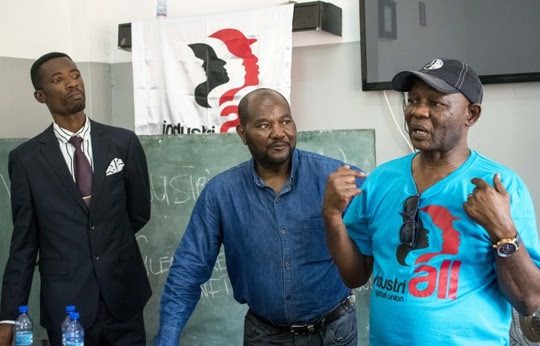 Systemic human and workers’ rights abuses ranging from constant threats of dismissal, poor health and safety practices, occupational diseases, racism and discrimination, unfair and unjust job classifications, low remuneration, and inferior salaries for local workers compared to foreign workers were among grievances raised at a mid-February meeting of the mission with around 80 workers from the Democratic Republic of Congo mines at the St. John’s Cathedral in Kolwezi.

Glencore just reported record-breaking profits for 2017 and said it anticipates increasing its cobalt production by 133% over the next three years, largely in response to increasing demand for electric vehicle batteries from companies like Renault, Volkswagen and Volvo. Cobalt from Glencore’s DRC mines is also used in the batteries powering Apple and Samsung phones.

The DRC Glencore workers, who are members of IndustriALL affiliate union TUMEC, described their treatment and conditions of employment as “no less than slavery”, comparable to “Guantanamo Bay”. Workers reported that their families are exposed to occupational diseases because they bring their work clothing home, as there are no facilities at work including laundry facilities, ablution, and showers.

“We are so filthy when we get home that we cannot hug our children,” said one worker.

The workers complained that the 750 ml of drinking water that they are given per shift was not enough. They described how their families did not have access to the Glencore hospital because of the distance between the medical facility and the community.

Workers described the different treatment and conditions of employment between Glencore’s Mutanda and KCC operations as a deliberate attempt by the company to divide and weaken trade unions.

IndustriALL organized the 14-17 February fact-finding mission in response to an urgent request by TUMEC to investigate the appalling conditions faced by mineworkers at Glencore’s operations in cobalt-rich Kolwezi, Lualaba province. The global mission was led by IndustriALL mining director Glen Mpufane, and included shop-stewards of the National Union of Mineworkers (NUM) and the National Union of Metalworkers (NUMSA) who work at Glencore in South Africa, as well as representatives from IndustriALL’s Sub-Saharan Africa Regional Office.

Glencore rejected TUMEC’s request for the mission to have access to Glencore’s DRC mines.

Mpufane said in response to a recent media report on the mission,

“Glencore told the press that it’s committed to open dialogue with IndustriALL and has a positive relationship with TUMEC. In fact, Glencore refused to allow the IndustriALL mission to visit its mines, and TUMEC members told the mission that Glencore gravely mistreats them.”

The global mission will send a detailed report to Glencore’s Head Office in Zurich, Switzerland, demanding immediate attention to the deplorable working conditions at its operations in the DRC. IndustriALL will also share information with Glencore’s investors and cobalt customers.