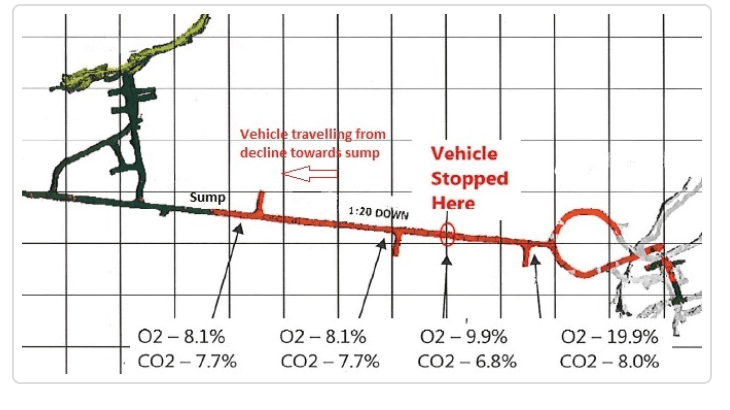 The Queensland Department of Natural Resources, Mines & Energy has issued an alert to Queensland Mines after a worker suffered breathing difficulty when he entered old underground workings while seeking to establish a ventilation circuit.

An underground mine heading was being progressively de-watered to enable re-entry to old workings and to establish a ventilation circuit. A pump fitter entered the unventilated heading in a light vehicle to check a sump pump when the vehicle’s engine stopped, (see the 50m square grid underground mine plan below).

While the fitter was investigating why the engine had stopped, he experienced “difficulty breathing and identified his heart was beating rapidly”. He called emergency over the radio, donned his self-rescuer and left the area on foot.

The Mine Rescue team, wearing breathing apparatus, investigated the scene and found low oxygen (O2 < 10%) and high carbon dioxide (CO2 > 6.8%) levels. Legislation requires that O2 is not less than 18% by volume. The current exposure standard (Time Weighted Average) for CO2, for all industrial applications except coal mines, is 5000 ppm (0.5%).The pump fitter donning his oxygen-generating self-rescuer prevented this incident from escalating.

The retreating water level in the sump exposed old workings, including a nearby raise which may have held a pocket of CO2, and/or a chemical reaction occurred in the sump area, resulting in CO2 displacing O2 in the atmosphere.

The lack of ventilation also meant the area was subjected to a build-up of vehicle exhaust fumes.

Work can only occur in areas which have a sufficient quality, volume and velocity of air to ensure a healthy atmosphere, unless a risk assessment has been completed and appropriate controls put in place. Confined space entry procedures should be considered when entering unventilated headings.

All mines should complete an audit of all unventilated headings to ensure they are:

The Safety and Health Management System should require that:

You can follow this link to the original Alert