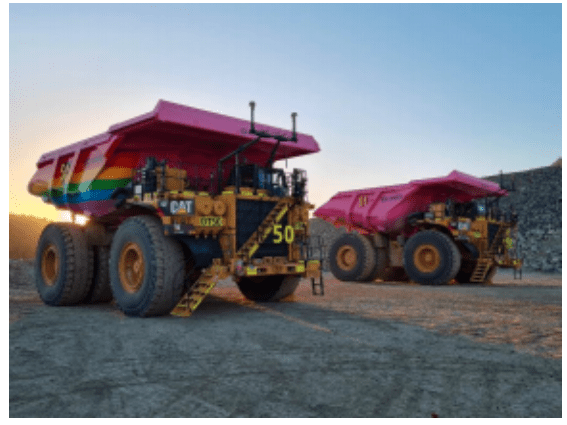 Leading Caterpillar® dealer WesTrac is well underway in the delivery of a fleet of autonomous haul trucks to Newmont’s Boddington gold mine in Western Australia, with the first commissioned trucks now operating autonomously.

Newmont announced last year an investment of USD $150 million to install a new fleet of Cat® 793F autonomous trucks and convert a number of existing units as part of its planned Autonomous Haulage System (AHS) at the mine, located 135km south-east of Perth.

The investment in autonomous haulage – the first use of the technology in a gold mining application – is expected to extend the life of the Boddington operation, which is WA’s largest gold producing mine.

The order is central to Newmont’s AHS project and includes 29 new Cat 793F haul trucks, as well as conversion to autonomous operation of a further seven 793F machines already operating on site.

Once operational, Newmont Boddington will be the first open-pit gold mine in the world with a fully autonomous haul truck fleet.

According to WesTrac General Manager Technology Alister MacPherson, the project aim is to commission all trucks across the new and existing fleet to AHS seamlessly.

“Newmont has acknowledged that the understanding and maturity of AHS in Western Australia is world-leading, and when combined with the extensive experience across the WesTrac team, the company sees the delivery timeline as readily achievable,” Alister said.

With the mine’s proximity to WesTrac’s new Technology Training Centre in Collie, approximately 100km to the south, training of Newmont maintenance and support personnel has commenced. Newmont has also utilised the Collie facility to introduce the new autonomous operations to its wider team in a safe training environment to assist in developing understanding and enabling adoption of the new operating processes.

Further training covering operation and maintenance of supporting systems are being delivered through the WesTrac Institute in South Guildford.

Alister said in addition to commissioning the new and converted haul fleet, the AHS project also includes the installation of supporting systems to around 160 additional assets.

“Those range from Cat 7495HD rope shovels, right down to light vehicles that are used by workers within the mine environment and need to interact with the autonomous fleet,” he said.

“As well, the project will enable the extension of mine life, supporting ongoing direct and indirect employment opportunities well into the future,” Alex said.

WesTrac Chief Executive Officer Jarvas Croome said safety had been a significant driver for the Newmont project and was a fundamental aspect of the broader mining sector’s move to autonomous operations.

“AHS operations have an uncompromised safety record in the mining industry and the rigorous safety controls included as part of the autonomous technology will further improve safety performance for Newmont and its contractors,” Jarvas said.

“WesTrac is excited to be part of the Boddington project and to partner with Caterpillar to deliver this significant milestone for Newmont.”