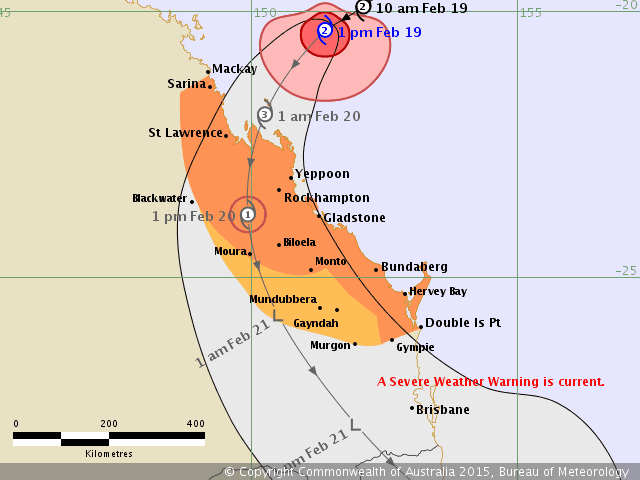 The old Mount Morgan mine site in Central Queensland has been prepared for  heavy rain and violent winds expected when Cyclone Marcia reaches the Capricorn Coast some time early tomorrow morning.

Queensland new mines minister, Anthony Lynham, said the Abandoned Mines Unit was anticipating 200-300mm of rain to fall on the region as advised by the Bureau of Meteorology.

In the past few hours the cyclone has been upgraded from a category 2 to a category 3.

The Bureau says, “Gales are expected to develop about coastal and island communities between Bowen and Double Island Point this evening, and extend inland to areas including Blackwater, Moura, Biloela, and Monto overnight and Friday.

Minister Lynham said his department would be keeping the local community appraised of the situation at the mine.

“Additional pumping capacity systems are in place at Dam 8 to divert freshwater flows from northern catchments away from the open cut pit.

“The Mount Morgan Mine Site Contingency Plan allows for a controlled water release if there are sufficient water flows in the Dee River and appropriate pH levels to significantly dilute pit water and minimise any environmental impacts downstream.

“A Dee River Alert Notification would be issued to downstream landholders and relevant stakeholders prior to any controlled release of pit water.”

Dr Lynham said there had been significant work conducted at the Mount Morgan mine site over the past year to increase its resilience to severe weather events.

“That one-in-2000 year event caused water levels to rise rapidly; resulting in the only uncontrolled release of water from the open cut pit in the mine site’s 100-year history.

“Ever since, the Abandoned Mines Unit has proactively lowered open cut pit water levels by more than 950 megalitres of water to minimise the risk of a recurrence and downstream impacts in the Dee River.

“The Department of Natural Resources and Mines has improved the capacity and efficiency of the site’s lime-dosing water treatment plant which – together with four water evaporators operating on site – are treating and removing up to 5.6 megalitres of pit water each day.

“The site’s seepage interception system captures more than 95% of surface seepage across the site and returns it to sump ponds for later treatment,” Mr Lynham said.

Workers Compensation Policies For 457 Visa Workers A Must For Employers
Warning Issued About Lightning, Dangerous Goods and Explosives
Comment