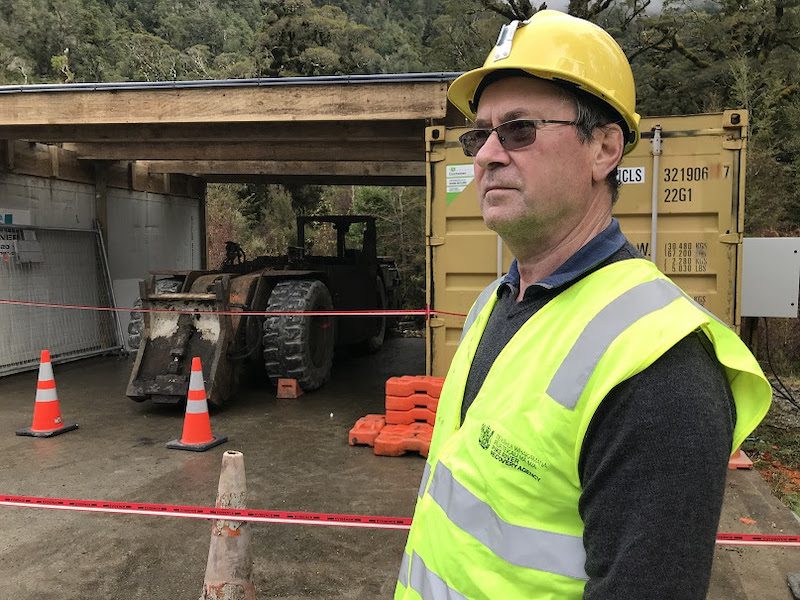 A loader driven by former miner Russell Smith at the time of the Pike River Mine explosion has now been recovered from 1581m up the 2.3km drift access tunnel.

The recovery of the loader went smoothly and to plan, and Pike River families were able to witness it being towed to a storage area, Chief Operations Officer Dinghy Pattinson says.

“We recovered the fifth and final robot 1566m up the Pike River Mine drift on Thursday 30 July.  Shortly after that, on Tuesday 4 August, we were able to recover the loader driven by Pike River survivor Russell Smith at the time of the 2010 explosion.”

“The loader had obvious signs of corrosion, but was towable.  The condition is as expected given it has been sealed up in a coal mine for 10 years.”

“After a very deliberate and exacting forensic examination of the vehicle and operational zone, led from the surface by our NZ police investigation team, we were ready to hook it up using another loader.  It was towed down the drift to the portal and then we used a third loader to help take it down the mine access road to a covered area near the mine’s administration buildings for storage and further examination.”

Only intrinsically safe flameproof gear is allowed underground – a very deliberate police methodology of mapping, recording, photographing and videoing is being used in the forensic recovery operations and info can be used to recreate underground topography and equipment placement.

The Agency is pursuing a recently certificated Australian Lidar scanner that believe is the first in the world that is intrinsically safe and flameproof for use in underground coal mines. Overseas certification does not mean NZ certification and there is a process to go through.

Last week underground workers were withdrawn from the Pike River Mine after samples returned positive for the presence of carcinogens.

Chief Operating Officer Dinghy Pattinson says the team working underground encountered an unusual substance on the walls and roof of the tunnel and took samples.

“As soon as we received notification back from our independent testing facility, we stopped work underground and withdrew the mine workers. We are now working with mining experts and WorkSafe to understand what the results of the testing mean for our
operations.”

All items recovered from the Pike River Mine drift are handed to the Police forensics team on site. Police have been notified and immediately ceased their work on site handling potential exhibits.

“The reason we do all the tests we do and plan for every eventuality is so that we can take action when something like this occurs. The health of all workers on site is always our top priority,” Dinghy says. “Until we fully understand the safety requirements to mitigate any hazards associated with this issue, our workforce is focused on surface rehabilitation tasks.”