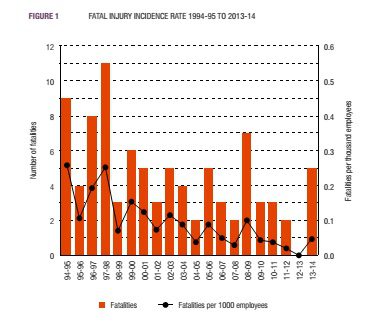 Despite five tragic deaths, the overall LTI frequency rate in Western Australia’s mining sector improved by 8 per cent in the 2013-14 financial year, according to new statistics released by the DMP.

The new report, titled Safety Performance in the Western Australian Mineral Industry also revealed that there were 456 LTIs during 2013-14, 41 less than the previous year (497 injuries in 2012-13).

There were five fatal accidents in WA mining during 2013-14. Of these, three were on gold mines (one underground and
two on the surface), and two occurred at iron ore operations.

State Mining Engineer, Andrew Chaplyn said, “The loss of five lives in work-related accidents in 2013-14 is in stark contrast to the outcome for Western Australian mining operations in 2012-13, which was the State’s first year on record with no fatalities — and almost 24 months between fatal accidents.”

“Although Western Australia has an enviable safety record compared to some jurisdictions, there is a commitment
across the board for everyone to go home safe from work,”

“However, the safety performance indicators are showing few or no signs of improvement. While there was a decrease in the number of serious injuries, the number of notifiable incidents, which includes potentially serious incidents or ‘near misses’, remains unacceptably high.”

“But for millimetres or seconds, some could have resulted in more serious consequences or even fatalities,” Mr Chaplyn said.

“As mining operations continue to take more responsibility for the safety of their own workforces, and strive to be resilient,  there needs to be a concerted effort to move away from administrative controls, which rely on worker’s judgement for implementation, to more effective controls using elimination, substitution and engineering methods.”

“The suitability of training and inductions, assessments of competency, and appropriateness of risk management tools applied to work tasks should also be reviewed in consultation with the workforce to identify potential improvements.”