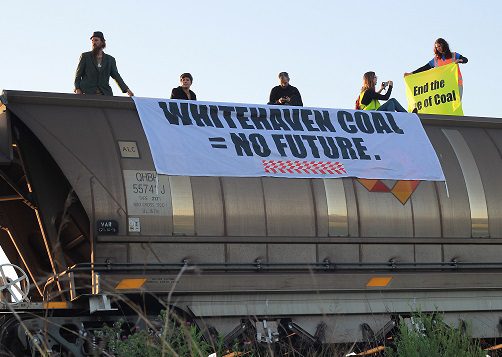 A 58-year-old protester locked himself to a coal train near the controversial Maules Creek coal mine last night, effectively stopping the mine’s first shipment of coal from getting to Newcastle’s Kooragang Island coal port.

­
A further group of 22 fellow protesters joined the man at the train this morning. Four protesters have since been arrested by police with eight people currently still occupying the train and refusing to leave.

Activist group Frontline Action on Coal have claimed to be organisers of the protest.

In a statement released this morning Jonathan Moylan from Frontline Action on Coal said, “Over the last twelve months, hundreds of people have been arrested slowing down construction of the Maules Creek mine. The fate of our country, and people everywhere, depends on coal being left in the ground. In the absence of leadership from the industry or the Government to shut down coal exports and prevent dangerous climate change, ordinary people have taken extraordinary action to stop this mine.

The 58 year-old protestor, “Bruce”, from NSW Northern Rivers, was one of those arrested. Speaking about why he took action, Bruce said:

“Australia’s response to climate change is headed completely backwards. “If we can stop this new coal mine we set a precedent for the rest of Australia to stand up.”

“A growing number of people are standing up to the coal industry’s plans to ship increasing volumes of coal and fuel dangerous climate change. Doctors, people of faith, IPCC scientists and earlier this month, former Wallabies captain David Pocock, have all taken action to halt construction at Maules Creek. Even Malcolm Fraser last week tweeted about Maules Creek, referring to the coal sector as an ‘industry of a past age’.