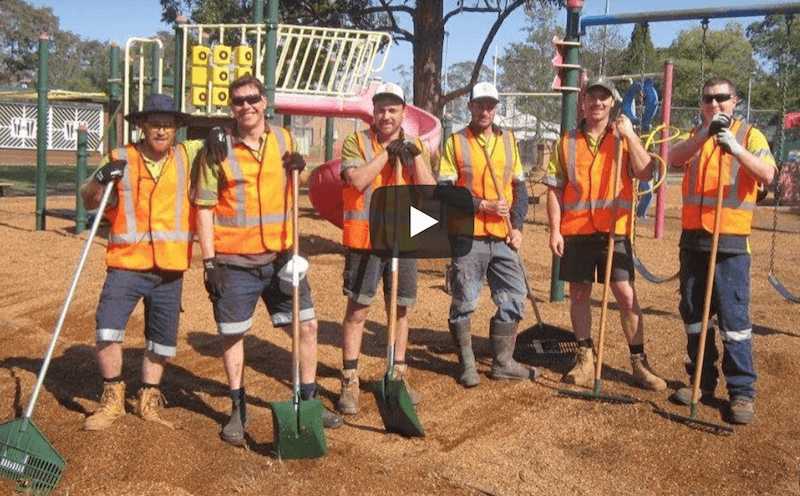 Tahmoor Mine has re-opened over the weekend. The re-opening follows a six week investigation into a significant safety related incident and rescue operation where two men were trapped in a cage for several hours.

Preliminary advice has indicated that the incident occurred after a winder tripped on a seam profile switch following excessive noise and vibration of head ropes. Tripping may have ultimately resulted from entanglement of a water ring in the counterweight head ropes. Read more detail about the incident following the video below.

Out of this negative safety related incident, Tahmoor Colliery management have found a unique way to turn the scenario into a positive benefit for their local community.

While the six week investigation into the incident occurred with the NSW Resources Regulator and SIMEC’s own team, SIMEC’s Tahmoor Mine staff were redeployed across the community to assist with projects.

The company’s mining chief operating officer Matt Reed told Josh Bartlett from the Wollondilly Advertiser that safety was paramount and SIMEC would always put the welfare of its workers ahead of production.

“We wanted to find the cause of this incident before coming back online,” he said.

“We’ve worked in conjunction with the regulator to minimise potential risks to both our people and our operations going forward.

“This downtime has also enabled us to identify longer?term plans for an automated solution that will further improve safety and efficiency.”

Colliery staff were redeployed into community projects around Wollondilly over the past five weeks. This short video posted by GFG Alliance, shows how a negative incident can be turned into a positive community benefit. AMSJ believes Tahmoor Colliery management have created a great case study for mining companies to effectively engage communities in the midst of adverse scenarios.

Preliminary cause of the incident

While investigations have been continuing into the event,  the NSW Resources Regulator has issued preliminary advice stating that “A fixture known as a water ring(guttering on the wall of the shaft used to capture water) has been sheared off the sidewall and is wrapped around the counterweight head ropes and guide ropes. Other shaft services related to the water ring had also been damaged.”

The Regulator also noted that a previously misaligned counter weight had been investigated by site staff.

The NSW Resources Regulator is continuing investigations into the incident but have released preliminary recommendations to the industry.

The Regulator States “While the analysis of the causal factors involved in this incident are continuing, mine operators should review their safety management systems, particularly focusing on:

The full report into the the incident at Tahmoor Mine from the New South Wales Resources Regulator is available here.