AMSJ » Vehicle rollaway at mine site 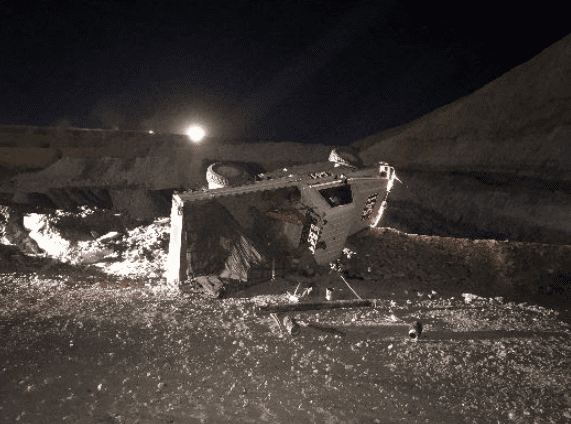 The NSW Mines Regulator has reported a vehicle rollaway at a mine site.

The Regulator’s release said ‘An unattended light vehicle moved an estimated 250 metres from where it was parked. It hit a windrow and flipped onto its side. The vehicle had been parked behind a drill rig but rolled away when unattended.’

The regulator says that ‘Drivers must comply with site protocols for vehicle park-up before leaving their vehicles.’

Research shows that the range of rollaway incidents across motor vehicles is largely under-reported.

he added ‘Of these incidents, one per week requires emergency services intervention. How does this happen? The driver forgets to- or does not apply the Parking Brake’

LSM Technologies (an industry specialist provider of vehicle rollaway prevention systems) says that “In most incidents, the predominant cause is where the handbrake has not been engaged. Unfortunately, forgetting to apply the Handbrake is a terrifyingly easy mistake to make when exiting a vehicle. Add to this the risk of Rollaways when the driver uncouples the brake line or the air tank disengages the handbrake as it is pressurised during vehicle start.”

Rollaway incidents have been previously classified into two main categories.

Creep refers to a scenario where a vehicle is moved from its’ original position through a range of forces including those from equipment such as forklifts or other powered manual handling equipment impacting on the body or chassis of a vehicle during the unloading process. Creep often occurs in unloading scenarios but may also occur from the forces of gravity on a vehicle that is inadequately braked.

A range of providers (including LSM Technologies, Brakesafe and within Australia have developed engineering controls that may assist in minimising opportunities for vehicle runaway.

Mines should ensure that all persons in charge of vehicles or vehicle operations are aware of the risks involved and have received formal training in all relevant risk control measures and procedures.

Refresher vehicle rollaway training should be conducted periodically to ensure that the information is retained.