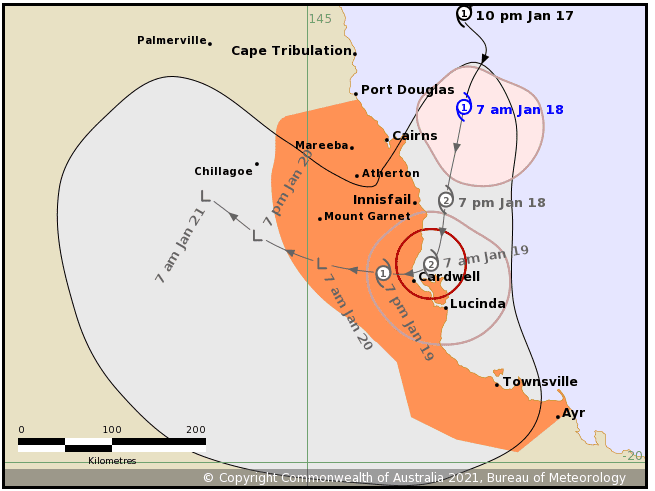 Tropical Cyclone Kimi in Queensland’s North may be upgraded to at least a category 2 cyclone later today with winds expected up to 140km/h.

Mines in North Queensland were placed on WATCH yesterday subject to the tracking of the cyclone.

It expects that destructive winds with gusts to 140 km/h may develop about coastal and island areas between Innisfail and Lucinda on Monday evening or early Tuesday morning as the core of the cyclone approaches.

Gales may also extend southwards to Townsville and Ayr early Tuesday depending on the movement of the cyclone.

The Bureau says that the Tropical Cyclone has the potential to produce flash flooding and major river flooding expected to affect coastal and adjacent inland areas between Cairns and Townsville during Monday and Tuesday. A Flood Watch is current for this area; refer to that product for more detail.

Tropical cyclone Kimi moved slowly southwards through most of Sunday but is expected to turn a little more to the south-southwest during today.

The Bureau said, “The system is most likely to approach and may cross, the coast late today or early Tuesday between about Innisfail and Lucinda, however, there remains considerable uncertainty with the crossing time and location.”

The system may intensify further during today and is likely to be at least a category 2 system as it approaches the coast.

AMSJ will continue mine alerts for tropical cyclone Kimi over the next day. Additional up to date information is available at the Bureau of Meteorology Site MetEye