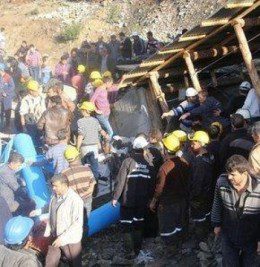 Turkey is in the news again for all the wrong reasons – eighteen miners are trapped 300 metres below the surface at the Has Sekerler coal mine, near Ermenek, after a burst pipe flooded the mine with water.

Twenty workers have either been rescued or escaped on their own from the flooded coal mine, but hopes are fading for the remaining workers trapped underground.  There has been no contact established with the trapped eighteen since the incident occurred late Monday.

Rescue operations are continuing with emergency crews attempting to syphon water out of three underground chambers.

The accident is the latest disaster to hit the Turkish mining industry after 301 workers were killed in May in an explosion at a mine in Soma in the west of the country.

The International Labour Organization earlier this month organized a National Tripartite Meeting on Improving Occupational Safety and Health (OSH) in Mining in Turkey. Government, workers’ and employers’ representatives and other relevant stakeholders concluded with agreement on the main elements of a roadmap on how to improve occupational safety and health in the industry.

“The attention of the world’s media is once again turned to the senseless danger that Turkey’s mineworkers are put under by an unregulated industry,” Mr Özkan said.

“Now it is simply not an option for Turkey’s government to ignore the calls for action on safety and health in mines. The urgent first step must be the ratification and implementation of the International Labour Organization’s Convention 176 that will bring the industry in line with international standards. Workers lives are not a commodity to be traded off against expenditure on safety.”