AMSJ » A day in the life of a Turkish Miner 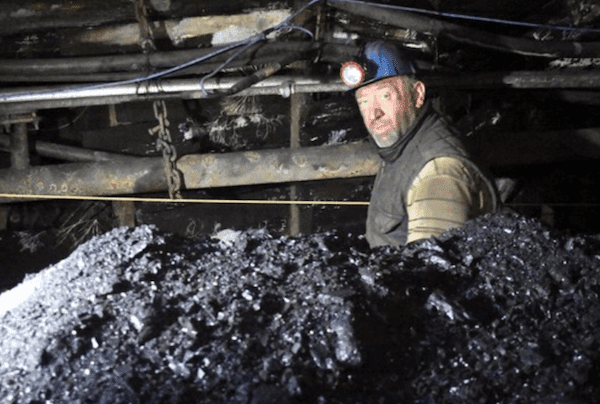 It’s great to find perspective on our management of work safety and working conditions in the Australian mining industry. We are often critical of our own efforts to manage safety and balance the needs of the workforce against production.

The article below highlights  some of the conditions encountered in a Turkish mine in the town of Zonguldak in the Black Sea region of Turkey. Daily Sabah Editor Rahmi Osman Kacmaz, recently published this feature article describing the daily work life of a Turkish miner and has provided us permission to share it with AMSJ readers.

Daily Sabah: Working in coal mines is one of the toughest jobs in the world and a miner from Zonguldak faces the hardships of his occupation one day at a time, leaving the outside world behind every time he steps inside the mine

Many of us complain about the struggles we face throughout the day, but there are people who spend most of the day underground. Life underground is tougher and more dangerous than you could ever imagine. A single mistake can cost you your life along with the lives of others.

Most of the male population in Zonguldak, a Black Sea city with rich coal reserves, work in mines to extract coal from under the ground. For them, every day is dangerous; every day is a new day to worry about their families and what would happen to them if something goes wrong in the pitch-black mines. 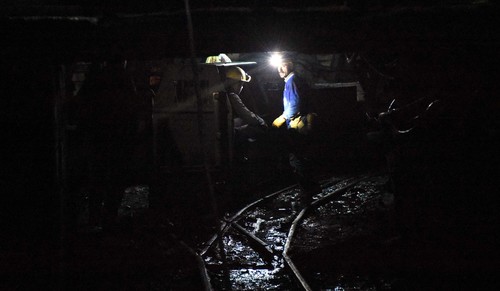 Ugur Kandemiroglu, 44, is just one of the thousands of miners in Zonguldak. Every day, when he is about to leave the house to go to work, he sees the worry in his family’s eyes. Instead of simply kissing him goodbye, the Kandemiroglu family pray to God to bring their father home safely.

Every day is a challenge for Kandemiroglu. He goes meters underground and tries to bring coal out in “absolute darkness” that can only be penetrated by lamps on the miners’ helmets.

Kandemiroglu leaves his house before sunrise at 5:30 a.m. His wife prepares his lunch and puts it in his bag. Before jumping on the bus that will take him to the mines, Kandemiroglu stops by a tea shop and enjoys a quick cup of hot tea to prepare himself for the challenging day ahead. 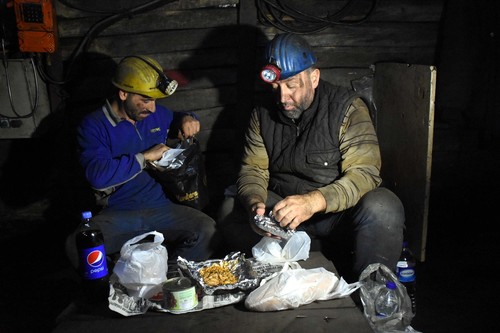 When he arrives at the mines, he has to change into his work clothes. After getting ready, Kandemiroglu and other miners don the necessary equipment, including a helmet with a lamp, a flashlight and other personal protection.

Once the miners are well equipped, they head down into the dark, cold tunnels and are briefed by their supervisors about their tasks for the day. When the time comes, each miner jumps in a wagon heading for their post.

Once he settles into his post, Kandemiroglu works eight hours strait with a one-hour lunch break. Until noon, Kandemiroglu continuously climbs in and out the mine to earn his bread. He usually works with a crane the miners call a “varagel,” which helps miners transfer the mined coal from one place to another. When it is time to eat, Kandemiroglu and his fellow miners gather in one of the halls in the mine and eat the lunches their mothers or wives prepared for them. 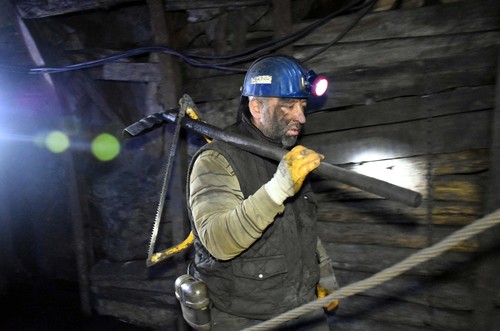 With a full belly, Kandemiroglu returns to his post. He breaks the coal, loads it in wagons and takes it to be distributed. The miners also handle the maintenance of the mine.

“Along with any new damage, we systematically replace wooden sections to prevent accidents,” Kandermiroglu said.

After eight hours, Kandemiroglu takes off his clothes, helmet and flashlight and climbs to the surface, finally catching a fresh breath of air. Before returning home to his worried family, Kandemiroglu says farewell to his brothers from the mine.

Married with one child, Ugur Kandemiroglu has been working in the coal mines for the last 12 years.

“It is hard to describe what it is like to work in a mine; to understand, one has to live and work inside the mine. We’ve gotten used to it. We love this job,” said Kandemiroglu.

Although it is a tough occupation, once a miner always a miner, according to the 44 year old. For a year, Kandemiroglu quit working in the mines and tried other jobs, but he could not make it work. “It was hard for me to work above ground. I tried but couldn’t do it; so I returned to the mines. I got used to the coal, the darkness and the brotherly love among the miners. For us, underground is where we belong. It is a risky job, mining. A single mistake or absentmindedness could create a catastrophe.”

Kandemiroglu has lost friends in mining accidents. “Accidents can happen. I was even involved in one, but we saved a lot of lives as well.”

“Mines are the heart of Zonguldak. Without mines, the city will be a heartless place,” continued Kandemiroglu. “We all know how hard mining coal is, but our country needs the coal and we need the jobs. Thank God we are healthy and able to work. I pray every day that no other mining accidents will happen in the future.”

Physically, working in the Turkish mine is hard, but the real challenge is psychological. “A miner needs to put the outside world behind him when going inside the mine. Anything can happen to a miner who is worried about his family and other stuff. I forget all about my family life here. If I think about my family in the mines, I could get distracted and cause an accident,” said Kandemiroglu

This story is published with permission and appeared in a leading Instanbul News Daily Sabah The original article was titled Absolute darkness: A day in a miner’s life