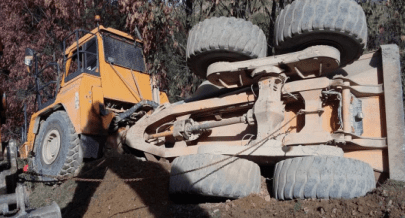 An ADT incident at an NZ Quarry has once again demonstrated potential severity of rollover incidents after an operator was flung through the window of the vehicle coming to rest on the right wheel arch.

A Minex Safety Alert stated that the ADT, loaded with rock, was travelling down a quarry haul road when the truck started to accelerate. The operator applied the brake, but the ADT did not slow down. In an attempt to slow the truck down the operator drove up an embankment to his left, however, this only diverted the truck back onto the haul road where it slid to the right and came to rest on a windrow.

The body of the truck tipped discharging the load down an embankment. The cabin remained upright, however, the force of the incident flung the operator through the right-hand window and he came to rest on the right wheel arch accessway, jammed between the side of the bonnet and the safety guard handrail.

Emergency services were called to the scene of the ADT incident, and the operator was airlifted to hospital for treatment. The initial investigation found that the braking systems were operating correctly and that the seatbelt was not faulty.