AMSJ » An investigation into alleged illegal mining in NSW 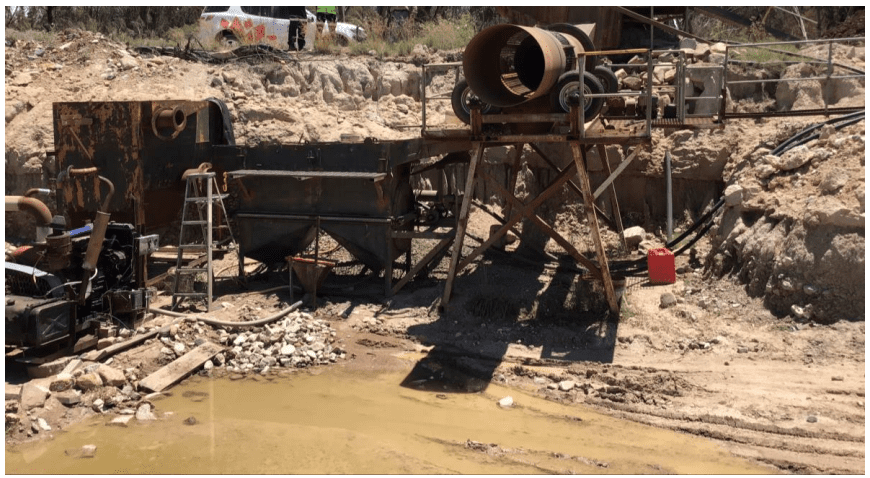 On 16 November 2020, Resources Regulator Inspectors accompanied by NSW Police, entered a property on Rickey’s Lane, Sapphire (near Inverell) after it was suspected that illegal mining was occurring on the property.

Upon entry, Inspectors observed two persons operating a large excavator and a dump truck in the vicinity of Frazers Creek. Inspectors identified that earth and material were being loaded into the truck and transported to a nearby site and processed using a trommel (a rotating cylindrical sieve or screen used for washing and sorting earth and minerals).

Three buckets of washed rock that contained blue stones, believed to be sapphires were found in the rear of a vehicle located on site. Other stones believed to contain sapphires were observed in the trommel. The stones were seized by Inspectors for further examination.

Sapphire is a scheduled mineral under the Mining Regulations 2016. It is illegal to mine for a scheduled mineral without a mining authorisation (section 5 of the Mining Act 1992). The maximum penalty for an offence of mining without authorisation is $1.1 million dollars in the case of a corporation and $220,000 or imprisonment for five years, or both, in the case of an individual.

Illegal mining can cause significant harm to the environment and damage sensitive ecosystems.

Both persons have been issued with prohibition directions under s.240A of the Mining Act 1992 to immediately cease illegal mining. The site will be monitored to ensure compliance with the notices and the mining laws.

The investigation is ongoing.