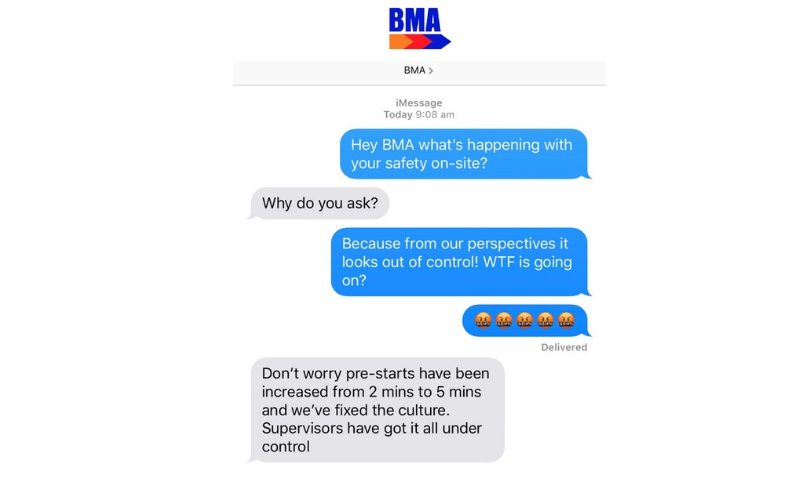 The CFMEU has hit out at BHP coal mine safety following the death of dozer operator Allan Houston in a media release issued yesterday.

CFMEU Mining and Energy is calling on BHP to provide information to its workforce on areas of concern at all seven mines operating under the BHP Mitsubishi Alliance: Goonyella Riverside, Broadmeadow, Daunia, Peak Downs, Saraji, Blackwater and Caval Ridge.

“We are concerned that safety incidents on BHP mines are not leading to an adequate review of operating procedures, neither at the site the incident occurred nor across BHP’s network of mines,” said CFMEU Mining and Energy Queensland President Stephen Smyth.

“BHP has thousands of lives in its hands every day across its Central Queensland coal mines.

“We are aware that Allan’s death has followed a number of near misses. In the wake of this week’s shocking fatality, workers are looking for greater reassurance that the company’s rhetoric about safety is being matched by action.”

Areas that the CFMEU is seeking further information from BHP include:

Access and egress into work areas: Has the company ensured that all workplaces and locations have both safe access and egress into their workplace/locations? Movement around work sites is critical, especially in the inherently dangerous conditions of a coal mine with massive machinery, water and operation throughout the night.

The CFMEU is aware of a number of vehicle rollovers at BHP mine sites over the past year, similar in nature to the incident that caused Allan Houston’s death, including a near drowning from dozer rollover just six months ago. They include:

In addition to operational safety concerns, the CFMEU has had reports from members disappointed about the response to this week’s fatality from mine management across BHP sites, which was inconsistent and in many cases did not reflect the seriousness of the event and the concern of workers.

A message from one worker at a BMA site to the Union said:

Another worker killed on a BMA site in 15 months and they just do a 2 minute pre start in the main room with everyone and then go out to your on strips with your own supervisors. No whole crew safety reset with senior management bloody joke.

The CFMEU will not let Allan Houston’s death be in vain, said Mr Smyth.

“This is an opportunity to review and reset the whole safety culture on BHP sites. That includes not only the way we work, but the treatment of workers who raise safety issues and make compensation claims. This is what CFMEU members will be standing up for.”

A number of recent events at BHP’S BMA sites have resulted in many coal mine workers questioning BHP’s commitment to the BHP coal mine safety program. The runaway train incident in WA late last year has also brought speculation that there is a disconnect between the board room and the mine when it comes to safety. Many coal mine workers have told AMSJ via social media that “Safety is great as long as it doesnt get in the way of production.”

One worker said “We are sick of the rhetoric when it comes to mine safety. They talk about zero harm and safety values, but ultimately it’s just talk. There is no real commitment at pit level when production always is king.”