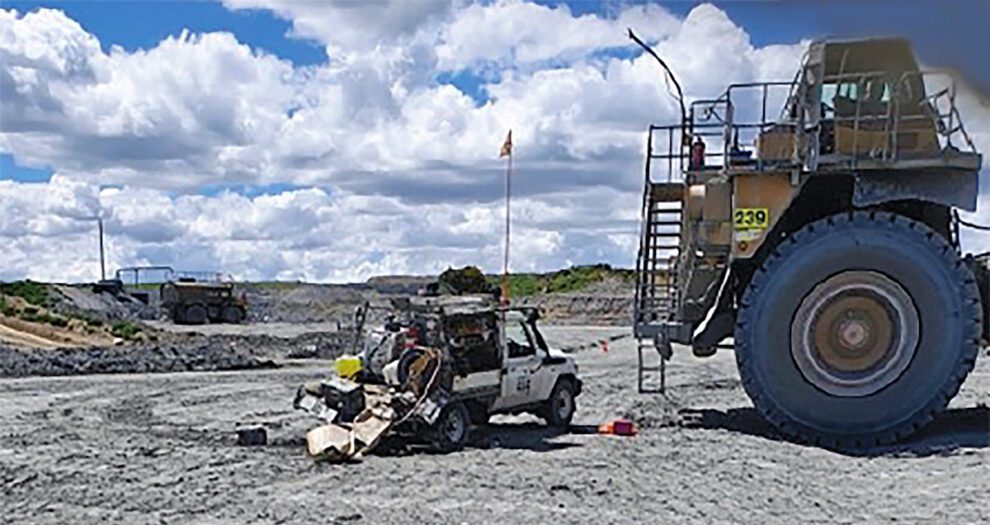 A maintenance worker learnt the hard way not to park in a way that obstructs heavy vehicles from moving freely.

A mobile mechanic recently thought it was a good idea to park his utility truck in front of several Caterpillar 789 dump trucks. He parked the ute about three metres in front of the heavy vehicles and slightly off the left-hand side of one dump truck at an undisclosed New Zealand mine.

The mechanic began servicing one of the trucks when one of the drivers finished his break, tooted the horn once and started the engine. He tooted his horn another two times times before driving one of the dump truck forward out of the parking area.

The front-wheel barely missed the light vehicle but the rear-wheel ran over the ute tray, crushing it and leaving tyre marks in the process. The dump truck driver left the scene and stopped after driving 500 metres because he had no idea he ran over the ute.

The mechanic claimed the responsible driver did not see multiple hand signals, or hear him shout many times to stop driving.

“The mechanic servicing the truck was on the catwalk, and was alerted of the potential incident when the driver tooted to start,” WorkSafe NZ said in a public statement.

“The mechanic had tried but had not been able to get the attention of the truck driver and saw the incident occur. The mechanic was able to get on the radio transmitter to tell the driver of the departing truck what had happened.”

No workplace injuries were reported from the incident.

WorkSafe NZ recommends the following steps to reduce the risk of an accident: