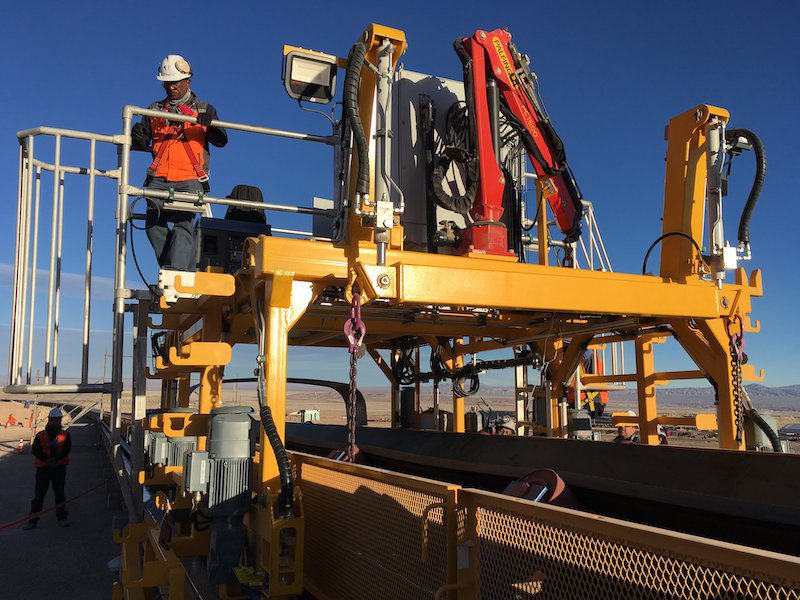 In 2019, the Chuquicamata mine – one of the largest copper mines in the world – was converted from an open-pit mine to an underground operation. In 2015, TAKRAF was contracted to supply the principal ore transportation system moving crushed copper ore from underground storage bins to the surface processing site.

The Chuquicamata mine, situated in Chile’s north, has been in operation since 1915 and is owned by Codelco, Chile’s state-owned copper mining company. Codelco is the world’s largest producer of copper and second largest producer of molybdenum. Over 100 years of open-pit mining have resulted in a mine that is some 1,000m deep, 5,000m long and 3,000m wide. Once the rock had been mined by drilling and blasting, the ore and waste material were transported to the surface by trucks for processing or for disposal. However, it was becoming no longer economically viable to mine deeper ore bodies using this extraction and transport process. Moreover, longer truck routes combined with a larger number of vehicles resulted in higher costs for vehicle maintenance and fuel, not to mention greater environmental pollution and safety concerns.

In 2015, TAKRAF was awarded the contract to supply the principal ore transportation system moving crushed copper ore from underground storage bins to the surface processing site. The system called for no redundancies, which means that for this project, high system availability, minimal system wear and easy maintenance of components were all decisive factors.

The project scope essentially called for:

The conveying system supplied by TAKRAF starts at the underground storage bin discharge. Two material stores in the form of vertical cylindrical openings with a diameter of 6m and a height of 60m separate the flow of mined material from transport to ore processing. The use of conventional belt feeders was originally planned for controlled material discharge. With this conveying method, material is transported from the discharge area along a 30m conveyor route to a transfer point by using a flat belt with vertical chute sidewalls.

However, optimisations made to the system after the contract was awarded led to a change in the system. By employing a feeder conveyor, the conveyor belt now has a 45 degree trough angle along the entire conveyor route, with the only chutes being in the storage bin discharge area. As with a belt feeder, the contour of the material to be conveyed is specified by a shear gate and the flow of discharged material is defined by varying the conveying speed. The elimination of vertical sidewalls along the conveyor path means less wear and thus reduced maintenance costs, combined with energy savings of around 25%.

Transporting material to the surface

Two conventional trough conveyors connect the material discharge of the feeder conveyors with the loading point of the inclined conveyor, around 900m away. Installed in a tunnel that extends some 6,400m to the surface, the inclined conveyors overcome a not insignificant difference in elevation of 950m. Each underground transfer point along the tunnel requires an underground chamber with a crane for maintenance work, power supply, transformers, and electrical and mechanical drive technologies, with adapted ventilation and suitable access paths.

In order to minimise the number of transfer points, the inclined conveyor section was successfully developed employing just two conveyors. In order to achieve this feat, it was necessary to use newly developed components that redefine the performance limits of belt conveyor technology. St 10,000 quality conveyor belts were used for the first time. Operating belt safety ratings of S = 5.0 required belt connections with a reference fatigue strength of over 50%. This value was proven on the belt test rig at the University of Hanover in Germany. Once again, new dimensions were achieved – this time in terms of installed drive power – with 10,000kW of installed drive power per drive pulley and 20,000kW per conveyor.

In cooperation with the drive motor manufacturer, ABB, TAKRAF engineers developed a drivetrain consisting of:

With the following specifications:

Maintenance of the air gap between the rotor and stator is a crucial requirement for the operation of the motors. The air gap, which is 14 mm, must only be allowed to deviate from the setpoint within small tolerances. Deviations in the air gap reduce the efficiency of the motor, and if rotor and stator were to make contact with each other, this would result in damage to the motor. The air gap itself is continuously monitored during operation. If deformations and/or subsidence in the steel structure or in the motor foundations lead to a deviation in the air gap setpoint, the stator has to be realigned. To simplify this process, the spacing between the rotor and stator at the non-driven end of the motor was fixed by a support bearing.

A membrane coupling compensates for the deformation of the pulley shaft caused by belt tension. The adjustable motor frame facilitates alignment of the motor during installation and ensures simple realignment if necessary. Eccentrics and spindles allow the stator to be adjusted in all directions. Should a motor fail, it can be quickly moved into a disabled position by opening the membrane coupling and adjusting the spindles. The system can then continue to operate only with reduced power.

The landscape surrounding the processing plants has been shaped by over 100 years of mining at Chuquicamata. In addition to the various processing systems, waste heaps, train tracks, roads, pipelines, and buildings scar the landscape. The challenge for the new conveyor system was to design a system that took into consideration this landscape for its entire length from the end of the underground tunnel (blue building in photo) to the processing plant more than 5 km away.

A continuous single flight conveyor with the following parameters was developed:

The conveyor design again revolved around ensuring high system availability, minimal system wear and easy maintenance of components. All loading points along the conveyor route were optimised in order to reduce conveyor belt wear. The arrangement of the rock boxes and grizzly fingers was verified with simulations using the Discrete Element Method (DEM).

Newly designed transfer chutes allow wear plates to be replaced quickly and easily. To replace idlers, a specially designed TAKRAF maintenance vehicle is able to travel along the conveyor path, enabling the conveyor belt to be lifted and worn idlers to be safely and
efficiently replaced. At the material discharge point, a bunker building performs a limited material storage function. Two feeder conveyors remove the material and feed it to the processing plants.

Three 5,000 kW direct drive motors drive this conveyor, with a St 6,800 conveyor belt with a belt safety of S = 5.1 being used. Vibration behaviour of the belt during start up and braking was analysed across all operating conditions using dynamic belt calculations.

The table provides some specifications of the conveyors used:

System parameters such as a St 10,000 conveyor belt and 20,000 kW drive power per conveyor redefine the limits of belt conveyor technology. This made it possible to achieve the goal of reducing the number of underground transfer points, thereby justifying the use of these components.

High system availability, minimal system wear and easy maintenance of components were essential criteria when designing this system. Numerous innovations that resulted in six patents were implemented for the first time, resulting in a modern, powerful and environmentally friendly conveyor system. Highly efficient electric drive motors replace diesel truck engines and as a result, CO2 emissions produced by transporting the material have been reduced by more than two thirds. 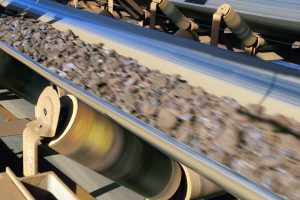