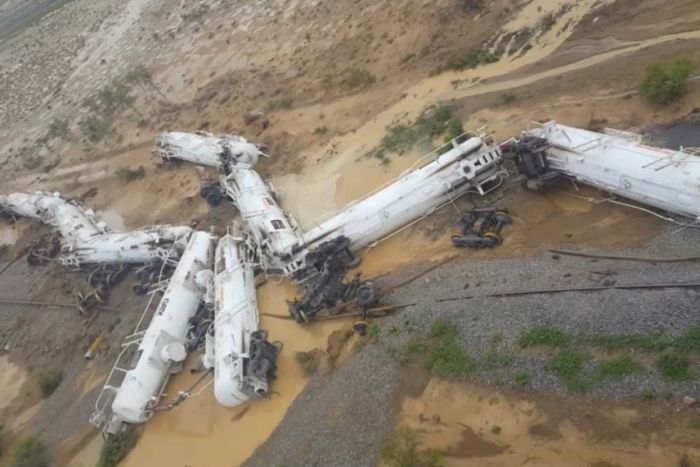 A two-kilometre exclusion zone has been set after a freight train carrying about 819,000 litres of sulphuric acid derailed 20km east of Julia Creek, on Sunday.

All 26 carriages were derailed in the incident, which occurred about 10.20am, and an emergency declaration and two kilometre exclusion zone remains in place under the Public Safety Preservation Act to assist emergency services manage the scene, which includes the construction of a safe structure to allow salvage crews access to the crash site.

Queensland Police said assessments indicate that one of the carriages has likely ruptured and it is possible that up to 31,500 litres of acid has leaked out.

No other ruptured carriages have been identified as leaking at this stage.

Sulphuric acid is often used by miners of base metals like gold and zinc to separate metals from ores.

Three drivers sustained minor injuries in the incident, according to Aurizon.

“Two drivers have been released (from hospital) and the third is expected to be released later today,” an Aurizon spokesperson said on Sunday.

“At this early stage, the cause of the incident is not known. Both Aurizon and Queensland Rail will investigate the incident and determine its cause.

“At this time the focus is on recovery of the incident site.”

The Flinders Highway remains closed in both directions between Julia Creek and Richmond as a result of flooding and the exclusion zone.