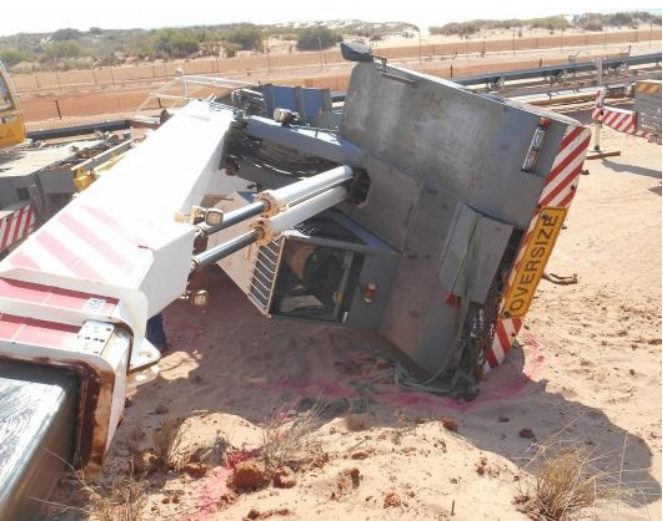 The importance of workers being properly trained and holding necessary licences has been highlighted after a pick-and-carry crane rolled on a mine site.

In November, an articulated, pick-and-carry mobile crane tipped onto its side while positioning a cyclone tie-down block weighing about two tonne.

According to a significant incident report released by the Department of Mines and Petroleum, the crane operator moved the machine with the boom almost fully extended, the hook block sheave in hard contact with the boom end sheave, and a swinging load, and as the crane moved, a front wheel travelled onto soft material on sloping ground and it tipped onto its side.

“The dogman, who was acting as a spotter, had to move quickly to avoid injury as the crane rolled towards him,” the report said.

The crane operator was uninjured.

The report highlighted the crane being operated outside of its design criteria and on sloping and uneven ground as direct causes of the incident.

“The hazards associated with moving the load were not fully identified or controlled. For example, the boom end sheave and hook block sheave were in hard contact (i.e. two-blocked),” the report said of the contributory causes.

“The mine site verification of competency appears to have been remiss in identifying shortfalls in the competency of the crane operator and dogman.”

The DMP recommended a number of actions to reduce the potential for pick-and-carry cranes to destabilise, including competency, safe systems of work and crane operation.

“The following requirements apply under the Mines Safety and Inspection Regulations 1995. A person (e.g. crane operator, dogman, rigger) must not do high risk work of a particular class at a mine unless they hold a high risk work licence for that class of work [r. 6.37 (1A)(a)],” the report said.

“Before commencing work at a mine every worker must be assessed to verify they are competent to perform the tasks assigned and operate any plant or equipment they are required to operate (e.g. pick-and-carry crane) [r. 4.13 (1)(b)].”

It was also recommended that before a crane operation is undertaken, a competent person should conduct a risk assessment.