The Roy Hill Project, in Western Australia’s Pilbara region, is turning pink for breast cancer awareness.
Roy Hill have unveiled the first three pink haul trucks to raise awareness for breast cancer, as well as the opportunities for women in mining.
In an industry first, the huge 225 tonne capacity trays on the remaining 34 of Roy Hill’s growing truck fleet will all be painted pink. Over a period of time as the existing fleet of haul trucks on site require major maintenance, they will also be painted pink.
The inaugural pink Truck, named Hope and driven by Tarnya Bain, delivered its first load of iron ore to the comp 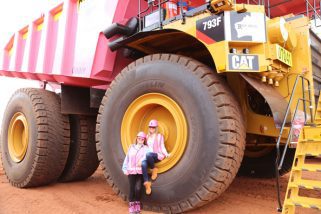 any’s crusher plant in a ceremony presided over by executive Chairman of Roy Hill and the Hancock Prospecting Group Gina Rinehart.
Mrs Rinehart launched Australia’s first breast cancer foundation back in 1992, and is a long-standing supporter of cancer research and support initiatives. She was recently awarded the Chamber of Minerals and Energy’s Women in Resources Lifetime Achievement Award, and was name Momentum for Australia’s Most Inspiring Woman of the Year.
“Breast cancer is the most commonly diagnosed cancer among women in Australia, excluding non-melanoma skin cancer,” she said.
“It is a disease that has greatly hurt the lives of many Australians directly or indirectly, especially women and their families and friends. 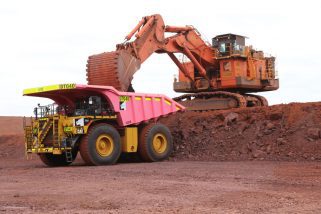 “One in eight women will unfortunately develop breast cancer in their lifetime, with an average of eight women dying from this disease every day in Australia.
“The more we can do to raise support for helping fight this very, very serious and frightening battle, the closer we are to finding ways to improve treatment options and cures for one of the biggest killers of women in Australia.”
The second and third of the Pink Trucks were christened Ginny and Rachel.
The trucks, pink PPE and socks worn by participants in the ceremony also reflected that Roy Hill is one of the highest in percentage employers of women in the iron ore and West Australian mining industry. 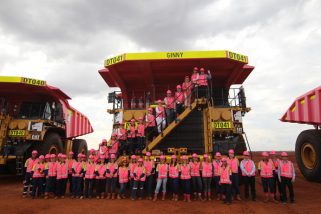 “From an early age I have been involved in a predominantly male centric industry, and now I’m seeing many more women employed in the industry and telling me they find this a great career choice,” Mrs Rinehart said.
“This is an industry that brings many opportunities for related industries in Australia, and together the mining and related industries underpin Australia’s living standards, generating significant revenue, paying taxes, and providing jobs.
“I hope those working in the industry always feel proud of their contribution to Australia. I hope in addition to being proud of their industry, you explain its importance to Australia and our living standards.
“I also hope female students can see a career pathway in the mining industry, but for this to continue to occur, Australia must maintain its cost competitiveness internationally, and implement ways to reduce government red tape and expense.”
Tagsbreast cancer cancer Gina Rinehart haul truck Iron Ore MINING NL Pilbara pink RESOURCES Roy Hill roy hill project WA mining Western Australia women in mining

Budget 2016: ‘A blueprint for growth’
No to rehab? The mining downturn risks making mine clean-ups even more of an afterthought
Comment