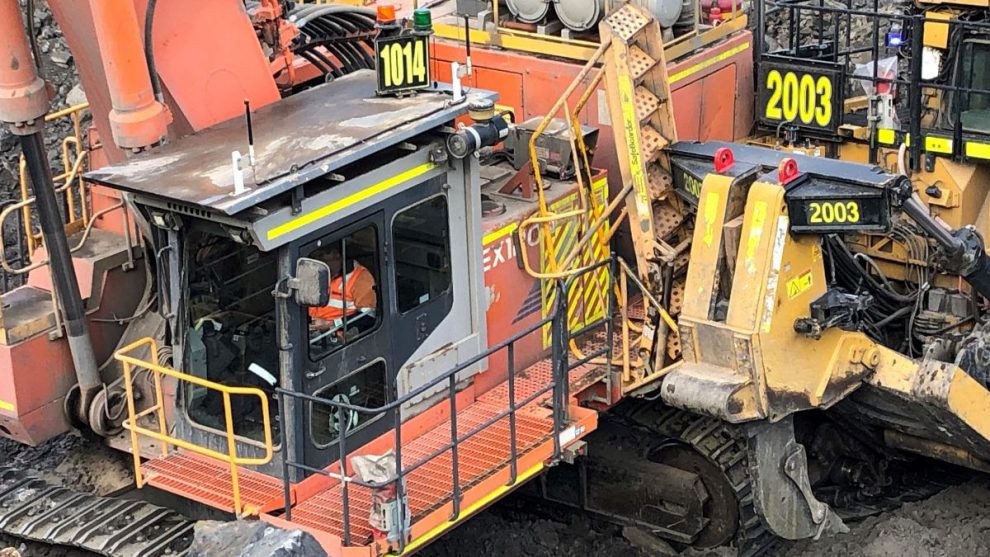 The NSW Regulator has released a report into a collision between a semi-autonomous dozer and a manned excavator at the Wilpinjong mine The revealed the need for more effective segregation between semi-autonomous / tele-remote equipment and manned mining equipment.

We have provided a summary of the information in the extract below. A link to the full report is included at the bottom of this story.

On Monday 27 May 2019, a mine worker was assigned to EX1014, a Hitachi EX1200 excavator. The initial task for the day was to clean the back of the bench in the dozer push area. This activity commenced in the northern section of the avoidance zone in the operating area. One operator was assigned to the control station, operating three dozers. The fourth dozer was undergoing maintenance work.

A trainer and trainee operator were in the control centre conducting training. Early in the shift, EX1014 had scaled the northern highwall and thrown the material behind, forming a window. Mid-morning, a mining supervisor instructed the operator of EX1014 to leave the dozer push
area and establish an edge windrow on the bench above. At the completion of this task, the operator had a crib break. At the end of his break, a discussion was held between the operator of EX1014 and the
SATS operator. They spoke about the work that needed to be completed during the rest of the shift but did not discuss the locations of other SATS dozers in the avoidance zone.

At the time of the incident, this bund was not in place. EX1014 proceeded back into the SATS avoidance zone from the north, scaling the highwall toward the south. The windrow previously formed stopped prior to slot 16 where dozer 2003 was operating in semi-autonomous mode.

Immediately prior to the incident, the SATS operator was operating dozer 2010 that had paused because it required operator input. As EX1014 proceeded past the end of the windrow and continued scaling the highwall, dozer 2003 had completed a push and commenced reversing. The dozer was travelling in second gear at approximately 7 kilometres/hour. As the ripper box contacted the rear of EX1014, it continued to drive, pushing EX1014 sideways approximately 1.5 metres.

As contact was made between the machines, the operator of EX1014 attempted to call the SATS operator on the radio to stop the dozer. This was unsuccessful, due to radio channel selection and radio traffic. The excavator operator had no other means to stop the semi-autonomous dozer. The operator was not injured.

The mine initiated emergency procedures. The operator ensured the excavator operator was not injured and notified the NSW Resources Regulator of the incident. The mine assisted the operator in safely exiting the excavator.

Cause of the incident

Analysis of the causal factors involved in this collision of the semi autonomous dozer is continuing.

The circumstances of this incident should prompt mine operators to review their safety management systems, focusing on: