AMSJ » Invest in Rotating Machinery Maintenance; Downtime will be Planned 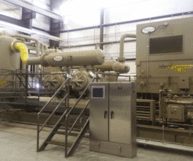 Electricity is powering modern life in more ways than ever before. Feeding on the energy that electric generators pour into the power grid, electric motors move the wheels of worldwide heavy industry. They are now even taking the place of internal combustion engines in cars, ships and aircraft. And, when it comes to investing in large-scale electric rotating machinery (RM), businesses need to think beyond the initial capital to unlock operational efficiency gains.

These figures indicate that an increasing number of industries are predicted to invest in electric motor systems in the coming decades. And, while buying the right equipment in the first place is vital, it’s only one part of the story.

This is because the Capex for an industrial RM may be significant but will be surpassed by Opex in the long term. In fact, the initial cost of a typical motor is just a tiny portion of the total cost of ownership, which spans widely over the lifecycle of the machine. So, when deploying a new motor, it’s crucial to consider all factors involved with its operational cost – including energy efficiency, reliability, system reliance and environmental impact, expected life-cycle costs and ease of maintenance.

From setting an optimized maintenance schedule to providing the right level of parts, labor and expertise to get everything back up and running quickly, proper maintenance is key to getting the most value out of vital assets.

While common unplanned outage causes – such as damaged bearings – may be relatively easy to fix on site, it’s far better to avoid the unplanned outage in the first place as any small deficiency in a RM’s operations can lead to costly downtime. For example, in the case of industries such as steelmaking, this can run to in excess of $30 million in lost revenue a year per single hot strip mill.

Prevention is better than cure

As it’s vital to focus on detecting and preventing faults before they happen, maintenance shouldn’t only take place after a breakdown that results in downtime, it should also be used to prevent unplanned downtime happening in the first place. Investing in a maintenance service built on proactive detection and prevention – rather than reactive recovery – will significantly reduce the excessive costs associated with unplanned outages.

Current calendar-based preventive maintenance approach may serve its purpose to maintain the machinery, if done frequently enough, but it may also entail excessive maintenance and induce unnecessary costs. Carrying out non-invasive inspections of equipment, reviewing maintenance plans that are currently in place and the environment in which equipment operates can give companies a strong foundation of knowledge on which to build a smarter, preventative maintenance plan.

Maintenance represents a significant cost to a business – so the more targeted it can be, the better. Digital is the next service evolution that will drive the shift from preventative maintenance to predictive maintenance focused only on components that show a degradation in performance – signs that could indicate a future failure.

However, there’s still some way to go before digital can fully unleash its potential. Today, majority components of a RM still needs to be inspected manually – something which must be carried out diligently to keep crucial equipment in good working order throughout its lifecycle.

To ensure a recommended maintenance plan is tailored to a company’s needs, GE utilizes an analysis of any major events in the lifecycle of their RM, along with its operational history and any maintenance records to provide a custom maintenance plan. The resulting plan would comprise the interval between inspections and the type of work to be carried out at each one. This would all be geared towards the equipment’s operating environment and how critical it is to operations. Equipment operating in a heavy industrial area would likely require more frequent inspections.

The type of work scheduled for such inspections ranges from minor interventions to carry out electrical testing, to more extensive mechanical inspections for in-depth evaluations.