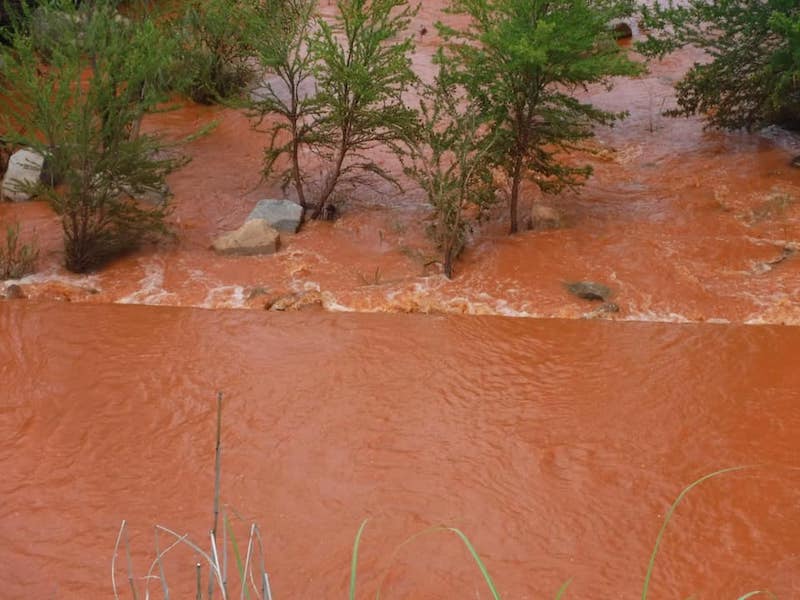 The Kimberley Land Council has taken urgent action following calls for concern about iron ore dust leaching from the Ridges Iron Ore mine site in Warmun.

Kimberley Land Council CEO, Brian Wilkinson and Chair, Anthony Watson immediately travelled to visit Warmun Community after being alerted to potential leaching in a creek that flows downstream from the Ridges iron ore mine, into the Wilson and Bow river from concerned members last Tuesday (16th February). During the visit Mr Wilkinson and Mr Watson met with community members and obtained samples from the creek for testing.

The KLC wrote to Environment Minister, Stephen Dawson and Director General of the Department of Water and Environmental Regulation (DWER), Mike Rowe raising the concerns from the community, requesting urgent action and a prompt investigation into water samples and the photos taken of the creek following the visit.

The Department and senior management from the Ridges Iron Ore Mine site responded immediately to the KLC request and attended the site of the iron ore dust leaching. The company confirmed that the levy bank within the mine site has broken due to high rain fall and caused run off of a red ore/red dust into the creek.

DWER Executive Director, Stuart Cowie, has informed the KLC that the initial findings and tests have shown no immediate threat to the health of the Warmun community, with the tests revealing good pH and turbidity levels.

Mr Wilkinson says the KLC will continue to work closely with: Warmun community members; the Department of Water and Environment; and senior management from Ridges Iron Ore Mine Site to ensure an extensive investigation into the incident takes place.

”The KLC is here to represent the Aboriginal people in the Kimberley, in this case, the people of Warmun and Doon Doon who fish and swim in this creek, and we will ensure we do everything we can to see this issue and the concerns of the community resolved as quickly as possible.

“This is an important opportunity for the Ridges Iron Ore mine to strengthen relationships and establish agreements with Warmun and Doon Doon communities.”

“The Ridges Iron Ore mine site has a social obligation to form agreements with all communities surrounding their mining sites, not just the communities they have direct agreements with. They need to strengthen their relationships with Warmun and Doon Doon communities and we are hopeful they will do this, whilst we await the outcome of the water tests”.