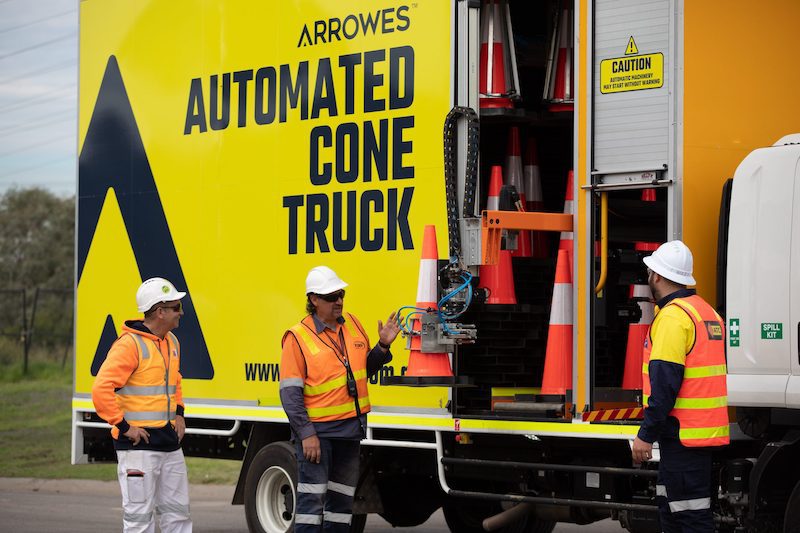 Motorists have been able to snatch a first glimpse on the roads of a pioneering automatic coneplacing and retrieving truck that reduces the need for roadworkers to manually perform the dangerous job alongside live traffic, possibly eliminating one of the biggest safety risks still facing roadworkers today.

Developed by Brisbane-based company Arrowes Roading Safety, the Automated Cone Truck, also known as the (ACT), replaces the need for roadworkers to manually lift and retrieve traffic cones with live traffic rushing past them. It is operated solely by the driver which drastically improves safety by minimising the instances of when roadworkers would usually be required to manually handle traffic cones amidst live traffic.

It was back in October 2020 that we reported the proof-of-concept launch of this truck. Now after successfully completing extensive off-highway testing the ACT has taken to the road network for the first time, with the Australian innovation being seen transiting on highways through QLD, NSW and VIC. A trial is now underway on the Sydney Road to Edgars Road section of Melbourne’s M80 Upgrade, which is being jointly funded by the Australian and Victorian governments and delivered by Major Road Projects Victoria (MRPV) and CPB Contractors.

Placing and retrieving traffic cones is still an incredibly manual task undertaken by roadworkers either standing on the rear of a vehicle, or it is done on foot. To date, ergonomics experts have struggled to identify a suitable method of placing and retrieving traffic cones that does not have an adverse impact on workers due to constant twisting of the body, repetitive manual lifting of heavy cones, or involve working in close proximity to dangerous live traffic.

Traffic cones are needed to protect road users and roadworkers while essential improvements or maintenance is carried out on busy roads and motorways. But, with traffic thundering past them at high speeds, it is one of the most dangerous jobs for our roadworkers.

Typically, traffic cone crews carry 50-60 cones onboard their vehicles which is enough to close approximately 1km of road. Once that crew has run out of cones, another crew must enter with more cones onboard for the next 1km of road closure, and so on, until the full length of road to be closed is complete. However, the ACT can hold 400 traffic cones onboard which greatly increases the distance of road that can be closed consecutively with the same vehicle.

The ACT is available for pre-order now, and excitement is building that more of the trucks will be seen on roads and motorways by the end of 2021.

Arrowes has contributed millions of dollars to the research and development of this vehicle, and has filed patents for their intellectual property – which is believed to be the first commercially available automated cone truck in the world. Arrowes’ workshop is in Brendale, QLD, and all the development and build of the ACT has been performed in house by the companies locally employed workforce.

According to the Centre for Accident Research and Road Safety, it is estimated that each year in Australia at least 50 deaths and 750 injuries occur to workers and the public in road worksite crashes which carries an associated cost to Australia of over $400m.

Neil Scales, Director General at the Department of Transport and Main Roads Queensland, comments Arrowes for its new Automated Cone Truck, which will go a long way to improving the safety of workers responsible for deploying cones across the country.

“It is a priority that we keep up everybody’s attention and focus on road safety. Any innovation that can help protect workers and everyone else on our roads, is welcomed by my department.”

“When road workers put cones out on the road and more importantly collect them at the end of the works, it is vital they are safe,” he says.

“We are always seeking new innovations to put people in safer positions while they are undertaking road works, to illuminate the risks associated with putting them in live unpredictable traffic.

Traditionally, many core tasks have been carried out on foot and it is here that we have a massive opportunity to improve safety and save lives,” he says.

“I have been in traffic management over the last 13 years and have witnessed many failed attempts to automate the setting and collection of cones. The Arrowes team have pulled off a groundbreaking innovation with the ACT – a true game-changer.”