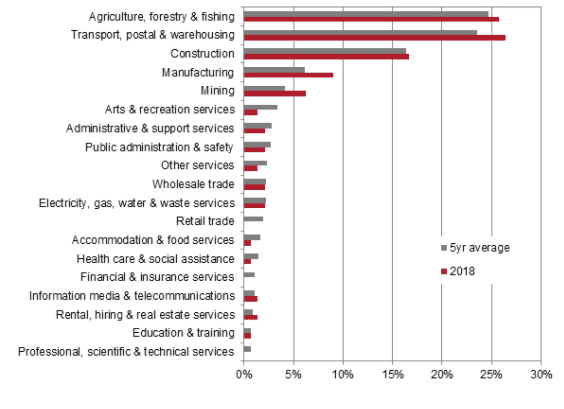 The number of fatalities occurring in the Australian mining sector last year has fallen with five workers killed till 18th November 2020 according to a Safe Work Australia report. In the same period last year, nine mineworkers lost their lives.

The mining industry ranks fifth in worker fatalities by all industry groups across Australia. The industry follows agriculture, forestry and fishing at number one (9.1 fatalities every 100,000 workers) and transport, postal and warehousing at number two (8.7 fatalities).

During 2015-2019, the construction and mining labourers group accounted for 34 fatalities, representing 36 per cent of all fatalities.

Most of the mining fatalities occurred in the primary mining jurisdictions of Queensland, Western Australia and New South Wales.

The most common causes of fatalities across all industries in Australia for the 2019 year include:

Safework defines fatality as people who were lost each year from injuries arising through work-related activity. Th reports do not account for workers who may have lost their lives from debilitating illnesses gained in the industry including lung diseases or other chronic conditions.