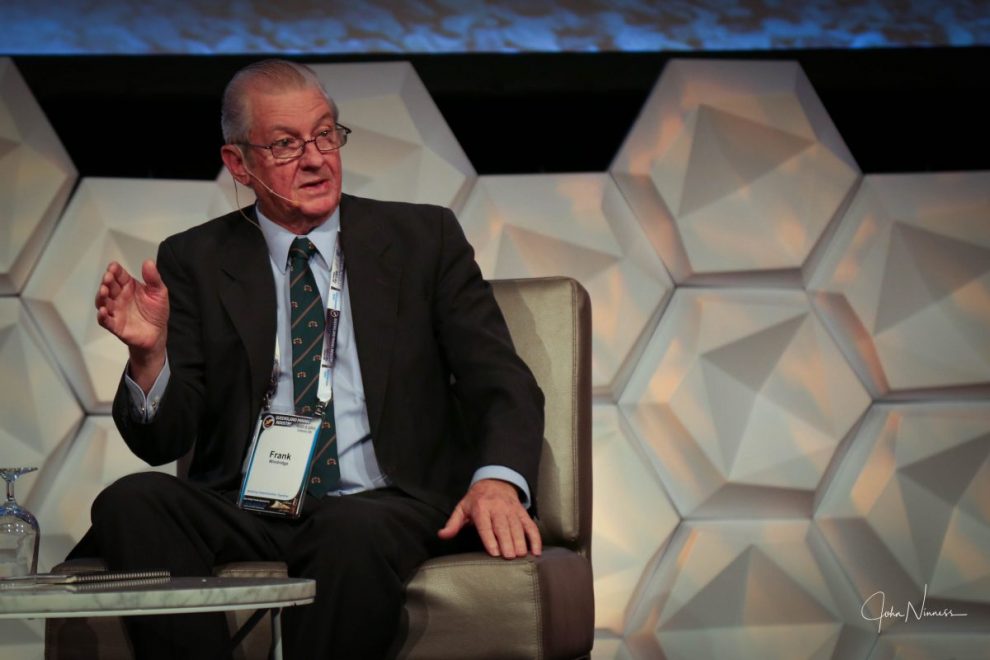 Frank Windridge – Australian mining safety legend shared some thoughts on his career with AMSJ this week. For those new to the industry, Frank was the Queensland Mining Warden and the author of Moura No. 2 Coal Mining Disaster report.  He oversaw the investigation and the inquiry into the incident.

Frank has an interesting and varied story. His exposure to country Queensland have no doubt shaped his character. Born in Hughenden he started work as a junior clerk in the magistrate’s court. He went on to become Queensland’s Mining Warden.  He’s lived in Beaudesert, Thursday Island, Mount Isa, Brisbane, Gayndah. He’s a true-blue Aussie gentleman and a lover of Queensland’s outback.

Appointed as a junior mining warden in 1982 and, with a change to the court structure in 1989, he became The Mining Warden of Queensland. The mining wardens were initially introduced in Australia during the Goldfield days. In the beginning, mining legislation was aimed at settling disputes on the goldfields of Victoria and later it extended its’ scope to investigating fatalities. In Queensland, the mining warden’s Court started during Gympie’s Gold rush to manage mining legislation and disputes across the state.

There were two sides of the Queensland Court – Fatalities and Tenures. There was a juggling act satisfying all aspects of the industry. The fatal inquiries and serious accidents took a significant amount of court time to deal with those matters. We had limited resources.

When you set on a fatality inquiry, four reviewers were generally used to ensure the technical independence of the inquiry. The reviewers were used to provide technical aspects. I often chose those people who knew the components of the job where the fatality occurred. If it was a welding fatality, I chose a welder as a reviewer. I also used some of Queensland’s mining safety legends like Ray Parkin, Greg Dalliston and Mathew Best (CFMEU).

I was a judicial officer as Mining Warden and I was sitting with experienced miners. I could rely on reviewers from their experience. They helped me do my job,

When I was a Mining Warden I saw the investigation of over 50 inquiries. There was a 1994 famous case TIck Hill which changed the direction of the mining wardens court. The Tick Hill case improved the process and ensured that additional people like families had a say in the mining warden’s court. The case involved a roof fall.  It involved the suffocation of a guy on a machine who was six weeks off retiring. It goes to show that you must be vigilant at all time.

Another was the Mt Isa Lead smelter collapse. The smoko whistle had blown, and a number of people had left. Three stayed and the structure collapsed, and one died. Another incident at Cannington involved a guy called Fowler who was welding in a wet area. He was working alone and found deceased. We examined the welding hand piece and found that the hand piece was not up to scratch. The manufacturers changed the product within two months. It was a great outcome.

How important were the recommendations of the mining court?

I hoped that they would be seriously looked at and only discarded if they were not followed completely. Sometimes they worked. In a lot of cases something was done.

For the Moura No. 2 Mine Disaster on the 7th August 1994 you were responsible for a major investigation.

I thought the normal approach would have been important, but it wasn’t, it was much bigger than that. I had four reviewers, normally there was union input but there was difficulty in recruiting management for the job as a reviewer.  Nobody wanted to do it fearing their careers might be later affected. I eventually had the services of Ray Parkin who was a great support in completing the inquiry. Professor Roxborough UNSW and others like Peter Neilsen (CFMEU) who contributed. I lucked out on this one – I got the right people to support me at the right time.

Moura originated with the gassy methane seam. Methane is methane ..it’s always been dangerous. People didn’t recognise the signs of the danger. There was no one person responsible for the decision made at the site with regard to methane. There was scattered information about the problem …it just didn’t happen. Do what you like was the attitude… nobody took charge.

My hopes are for a better and safer industry.

In the report I took the move to change to risk-based legislation in Queensland. We needed an outcome focus of legislation to ensure everybody become aware of the risks and signs, and then was able to deal with them. There had to be a better way of doing it. We needed people to look at the risks and not do it if there was risk. Training is critical even in non-gassy mines, it can be dangerous. Management companies have started to realise there responsibilities as corporate citizens. The CFMEU are on to it and are training and up skilling. The Check Inspectors are also on to it.

Were there any patterns  of injuries you noticed?

It is difficult to know if patterns occurred. Vehicle incidents on surface were always a problem, people driving down stopes, tire explosions. I have to say that training is so important. I’ve noticed that young people realise that safety is critical, they now realise implications on the families of the industry. It is in everybody’s interest to ensure people look after their mates.

Vehicle incidents on surface were always a problem

What about the judicial process?

The judicial process had limitations in looking after the families. The court didn’t have the experience or facilities to provide remedies for families. The union looked after that

What’s your hopes for the industry?

My hopes are for a better and safer industry. It is the backbone of the economy. We are a resource rich nation. We have standards of living in this country that have resulted from the mining as the backbone of the economy. Whether it be Victoria or Queensland or NSW, the mining industry has supported the states for a long time and good regulatory processes should be strong for the future.