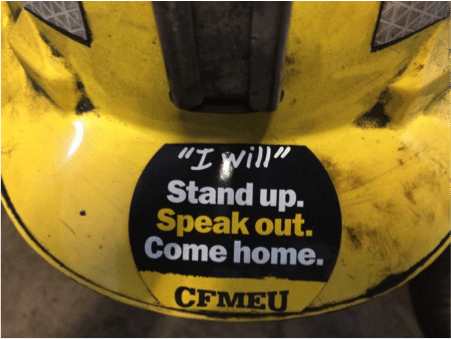 Workers at Queensland coal mines will wear safety stickers on their work gear today as part of a Day of Action to promote safety in their workplaces, despite this being banned by many employers.

CFMEU Queensland District President Stephen Smyth said the union is ramping up its safety campaign following the deaths of three mine workers this year in Queensland alone and safety standards dropping in the generation industry.

But the BHP Billiton Mitsubishi Alliance responded in a letter by demanding “posters and stickers should not be placed on BMA property” which includes workers’ hard hats.

“Some workers have been threatened with disciplinary action over stickers on their hard hats which have messages in support of worker safety, such as ‘I will stand up, speak out, come home’.”

The BMA letter also suggests that campaign messages only be placed on “noticeboards provided for the use of employees”, however Mr Smyth said these billboards had been removed.

“This is a very serious issue but it’s laughable that their suggestion is to place safety information on noticeboards which don’t exist. “Mining is a dangerous industry. We have had a spate of fatalities in Queensland coal mines in the past year,” Mr Smyth said.

“The Stand Up Speak Out Come Home campaign is run to encourage mine workers to make safety their top priority.

“Workers who are harassed and disciplined over petty matters like stickers on their hard hats will be less confident to report serious issues affecting safety including corners being cut.

“Employees that put safety first should be rewarded, not threatened with being sent home.”

Mr Smyth said the stickers do not breach any workplace codes of conduct and do not represent a safety hazard and the reason given by one employer for opposing the safety stickers was that they were ‘graffiti’.