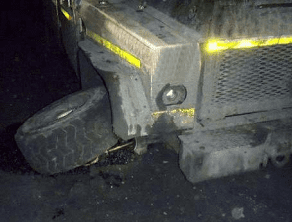 Six out of ten underground personal transport vehicles at a New South Wales mine were found to be operating with faulty axle assembles by personnel investigating the cause of an accident.

According to a recently released NSW Mine Safety Alert, investigators found that both front steering hubs of a vehicle failed in quick succession leading to an accident at an unnamed mine in November of 2014. The vehicle narrowly missed colliding with a roadway wall before coming to a stop.

According to the Safety Alert the axle steering knuckles of the vehicles had recently been repaired in spite of the manufacturers recommendation that stub axle assemblies be replaced, not repaired.

“One repair was a re-weld of the stub axle. In the other repair, the stub axle was machined undersize and a repair sleeve was fitted.” the Alert said.

“Other vehicles at the mine with similar axle assemblies were inspected for failings with six out of ten identified as needing replacement.”

To prevent future accidents of this kind from occurring, NSW Mines Safety recommends that; “Safety critical steering components on vehicles should be replaced if they have been damaged.”

“If replacement is unreasonable, repairs (including reclamation works) on safety critical steering components should only be carried out using procedures developed by the vehicle or component manufacturer, or a qualified professional engineer.”

“The person who manages or controls personnel transport vehicles should review maintenance records and/or inspect vehicles to identify where safety critical steering components may have undergone repairs (including welding or surface reclamation).”