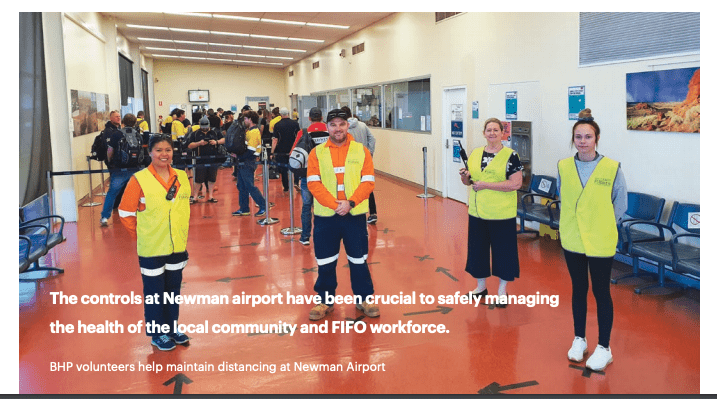 How do you put in place social distancing controls, in a small regional airport with up to 2000 travellers every day? You involve
the whole community.

The massive improvements seen at Newman Airport on COVID-19 controls throughout March and April could not have taken place without the Shire of East Pilbara leading the charge, closely supported by volunteers from BHP’s Newman Operations and Jimblebar teams.

How mining can support a stronger Territory recovery

“They put together some great controls to make sure there is adequate physical distancing between people at the airport, however they needed support to help make sure the controls were being followed,” Dani said.

“We have a huge number of BHP people moving through that airport each day, so it was only right we helped out.

“The Shire took the lead, setting up gazebos and chairs in what we called the ‘staging areas’. We simply put on our ‘Continuous Improvement’ hats and enhanced the controls, like tape on the ground, adding new markers for social distancing, removing chairs, adding new staging areas and more signage.

“Each day is different, and numbers play a huge part in how things are managed – which is why our Non-Process Infrastructure team has been so helpful.“

“They put together data from bus and flight schedules which allows the teams on the ground to prepare for crowds. It’s been one big team effort.”

The controls at Newman airport have been crucial to safely managing the health of BHP’s FIFO workforce in Newman, as well as residents and community members.

George Martin, one of BHP’s shutdown supervisors and he has been based in Newman for the last couple of months.

George normally lives in Queensland and is part of a maintenance services team that goes from site to site across BHP’s iron ore operations in WA and he has seen a lot of changes made to protect the workforce and the community.

“Everyone has settled into the changes now which protect the community that lives here – including my daughter and grandson,” George
said.

George’s daughter and grandson Harry live in Newman and he said it was hard being at camp and not being able to visit them.

“It was different, and change is always hard. But everyone accepted the improvements as necessary. Some controls are still in place. Everything has been very well managed at site, we’re keeping our distance from each other.

“Kalgan’s Village is being run as best as can be. When we couldn’t go into town, there was a delivery service set up which was great. The biggest changes were at the mess, with disposable gloves and plastic knives and forks. It’s pretty much like having a picnic,” he explained.

George planned to stay in the Pilbara region to support his crew, now that the inter-state restrictions are in place.

“There’s three of us in my crew who are here for the long-haul, now that the restrictions are in place. The next shutdown will be at Mining Area C so that’s where we’re headed next!” 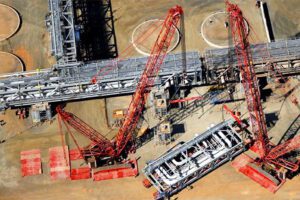