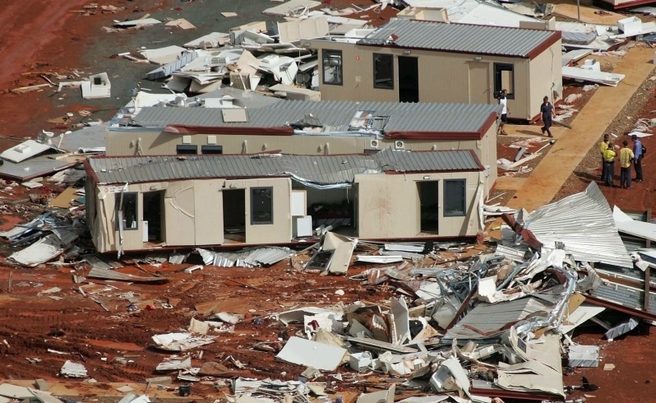 At the Inquiry into the deaths of two mine company employees during a cyclone in 2007, a surveyor has admitted that his gross incompetence led to a workers camp being built in a high wind risk area, prone to cyclones.

Kitchen hand Debra Till, 47, and excavator operator Craig Raabe, 42 both died when Tropical Cyclone George tore through their workers camp in Western Australia’s Pilbara, smashing the dongas in which they were sheltering.

Building surveyor Chad Harvey told the Western Australian Coroner’s Court on Tuesday that he, “didn’t understand what the co-ordinates he was given meant.”

Harvey was in the employ of the Shire of East Pilbara at the time of the event.

Mr Harvey told the Inquiry that he had been told the camp would be built about 90km inland from Port Hedland and 15km northeast of Wodgina. Despite this he relied solely on the co-ordinates he was given.

The West Australian reports that “Once the location was brought up on the colleague’s computer screen, he visually picked it out on a wall map – incorrectly determining the site was in a rural area with low cyclone risk.”

It was in fact in a region prone to cyclones.

“Do you accept now that was the incorrect wind region?” counsel assisting Philip Urquhart asked.

“By whom?” Mr Urquhart asked.

Mr Harvey agreed his match-up to the wall map was wildly inaccurate, saying he didn’t pay attention to the email description of the site.