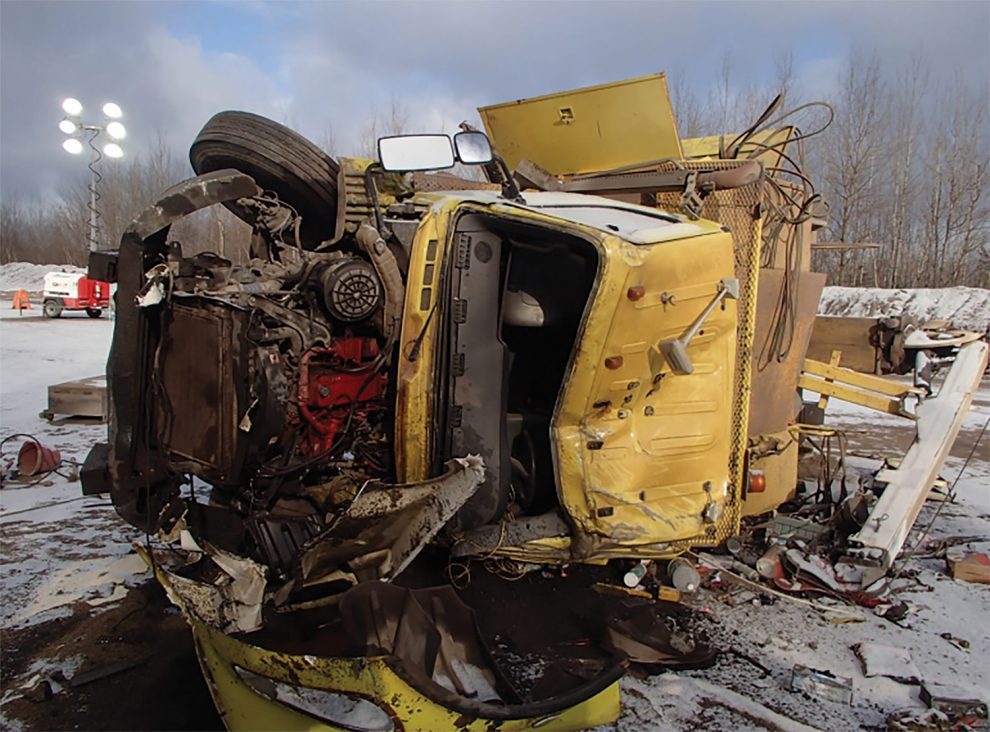 On November 5, 2019, Kenny L. Mattson started work at 4:55 a.m. Mattson worked alone, performing maintenance at various working places. At approximately 9:35 a.m., David J. Woods, Truck Driver, observed Mattson traveling east on the East Pits haul road toward the Laurentian and Lynx pits. Woods saw Mattson momentarily stop on the haul road, then resume traveling around a roadway curve and out of sight. As Woods rounded the same curve a short time later, he discovered Mattson’s service truck overturned on the driver’s side in the roadway. Woods radioed for emergency assistance. Mine emergency response team members and plant security responded to the scene followed by local police and fire departments. Justin Root, Paramedic, City of Virginia Fire Department pronounced Mattson dead at the scene, at approximately 10:06 a.m. Root documented the victim’s primary cause of death as “Traumatic Injury” and “Cardiac Arrest” as secondary cause of death. According to the medical examiner, since the victim had obvious multiple blunt force traumas, he performed an external exam only.

“The investigators examined the driver’s seat belt and found the buckle to be functional. However, the seat belt retractor mechanism did not function properly.”

MSHA’s accident investigation team conducted a physical examination of the accident scene, and interviewed mine management, mine employees, the union representative, local law enforcement and rescue agencies. See Appendix A for a list of persons who participated in the investigation and those interviewed.

DISCUSSION
Location of Accident
The accident occurred on the “East Pits” haul road leading to the Laurentian and Lynx pits. The haul road was hard-packed dirt, wide and relatively level with an approximate one percent grade. Berms, approximately ten feet high, alongside the roadway were made of hard-packed spoil material. Cold dry weather conditions created a frozen, but not icy, roadway.

WEATHER
The weather at the time of the accident was 17° F with clear skies. Investigators did not consider the weather to be a factor at the time of the accident. Equipment Involved The service truck involved in the accident was a 2012 Freightliner M2 Business Class, VIN 1FVACXDTODHFE6526, equipped with a Model 7500 IMT crane. Examination of the service truck did not reveal mechanical deficiencies or defects that would have caused the accident. Tires on the service truck exhibited adequate tread depth and did not show any signs of mechanical damage. The investigators examined the driver’s seat belt and found the buckle to be functional. However, the seat belt retractor mechanism did not function properly.

TRAINING & EXPERIENCE
Kenny L. Mattson had 15 years of mining experience with Minorca and met all Part 48 training requirements. Root Cause Root Cause: Minorca’s policy required drivers and passengers of all vehicles to wear seat belts at all times. A seat belt was not in use at the time of the accident, allowing ejection from the cab of the vehicle. Corrective action: The company retrained all employees on seat belt usage and modified their policy to include performing a proper seat belt examination to ensure its functionality.

CONCLUSION
Kenny L. Mattson, died while operating his service truck; it veered off the road, struck a berm, and ejected him as it overturned.

CRIME & PUNISHMENT: Have the new industrial manslaughter laws got anything to do with healthy, safe workplaces?
Addressing social licence to operate
Comment