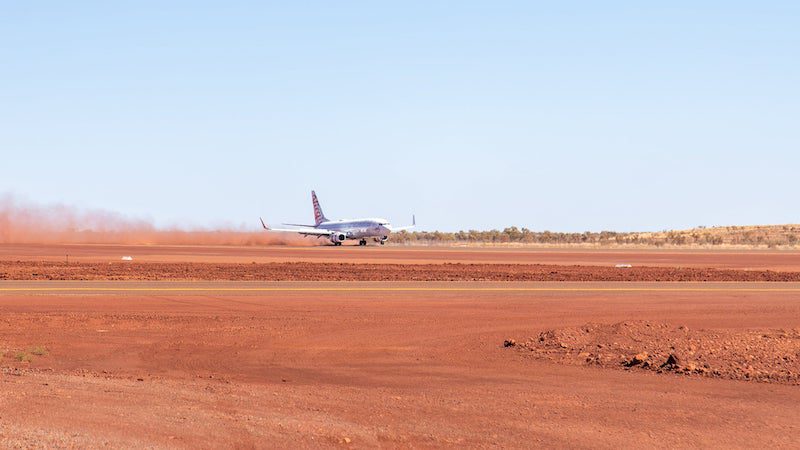 Western Australia’s newest airport has opened at Rio Tinto’s $2.6 billion Gudai-Darri[1](formerly known as Koodaideri) iron ore project in the Pilbara where construction is progressing ahead of the expected production ramp-up in early 2022.

The facility can accept a range of different aircraft including Boeing 737’s, A320’s, F100’s and King Airs. The current flight schedule includes four flights a week with additional flights expected to be added to the schedule next year. The airport is expected to handle more than 600 workers in a day at peak operating times.

The airport will deliver significant benefits in terms of minimising employees interaction with vehicles and driving as well as helping to manage employee fatigue thanks to a significant reduction in travel time from an alternate regional airport. The airport will also provide a safer landing option for Rio Tinto’s long-standing partner the Royal Flying Doctor Service.

Rio Tinto Projects general manager Gudai-Darri, Anthony Radici said, “You get a real sense of the immense size and scale of our Gudai-Darri operation once you fly in to this new airport.”

Rio Tinto Iron Ore acting chief executive Ivan Vella said “The construction phase of Gudai-Darri, our most technologically advanced mine, has a strong focus on supporting local businesses with contracts valued at more than $2.3 billion awarded to date.

“These contracts have supported approximately 2,000 jobs in the construction phase and the mining operation is expected to support about 600 jobs on an ongoing basis. We are proud to support West Australian businesses as we progress a pipeline of investment opportunities in the Pilbara valued at more than A$10 billion over the three years to 2022.”

The full construction and design of the airport will be completed by local partners Primero Group, NRW, Worley and GHD together with NRW subcontractors Colas, Fulton Hogan, TEC services, Brookdale Contractors, Bennco and Karlka Fencewright.

[1] Rio Tinto is working in close partnership with the Banjima and Yindjibarndi people as the traditional custodians of the land upon which the Gudai-Darri project, operations and rail are located. Following a request from Banjima Elders, the project, formally known as Koodaideri, will now be pronounced and spelt in Banjima’s language as Gudai-Darri.
TagsFIFO jobs Rio Tinto rio tinto job western australian mine