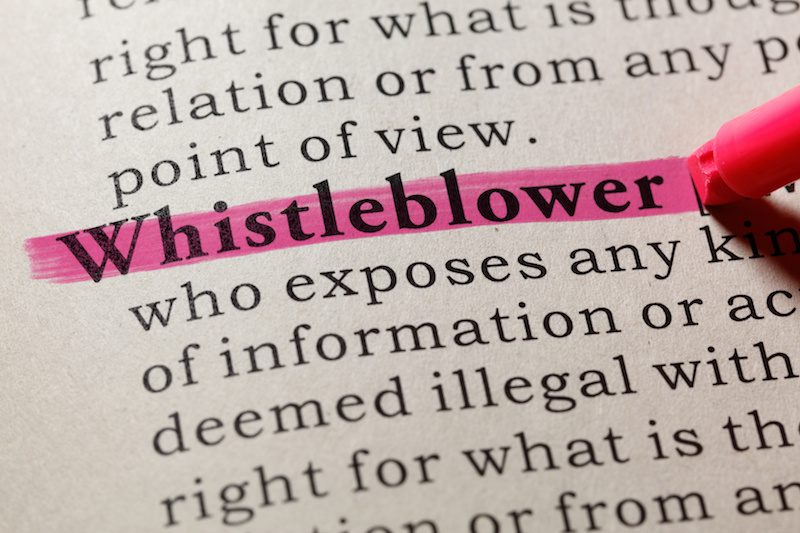 New laws requiring organisations to protect whistleblowers and implement whistleblowing policies have passed through the Australian Government and is expected to come into effect on 1 July.

On 19 February 2019, the House of Representatives passed the Treasury Laws Amendment (Enhancing Whistleblower Protections) Bill 2018. The Bill is due to receive royal assent and commence operation 1st July 2019.

Professor A J Brown, Professor of Public Policy and Law at Griffith University, has highlighted a few key aspects of changes.

Professor Brown said that legal protections do not only kick in after a whistleblower starts to experience reprisals.  Only taking action on reprisals after the event is like giving a band-aid to an amputee – by the time compensation rights are triggered, it is usually too late. All public and large proprietary companies are required to have whistleblowing policies which spell out how they will “support and protect” those who speak up before they begin to experience any detrimental effects. The key word being “Before”

Professor Brown also highlighted that “This culture-changing step is crucial.  Many companies are good at getting their employees to reveal wrongdoing.  Their problem is knowing how to actually protect them when they do.”

A company can also now be held liable if it fails in its duty to prevent detrimental acts or omissions – such as by having no support plans or neglecting to implement them.

This provision effectively grants whistleblowers the right to sue for such a failure. Professor Brown said that this is a world first in Whistleblower protection.

Rules for whistleblowing outside the organisation also set a new benchmark.  If employees blow the whistle at least to a regulator, and nothing is happening in 90 days, or there are emergency circumstances, it’s relatively simple for them to go public and still be protected, Professor Brown said.

The law provides for a requirement for public and certain larger private companies to have in place compliant whistleblowing policies by no later than 6 months after the commencement of the legislation, which will be 1 January 2020 if the Bill receives royal assent by 31st March 2019.

Whistleblowing has come a long way

In Australia and New Zealand, the first wide-ranging national research into whistleblowing – called “Whistling While They Work” – drew responses from 702 public, the private sector and not-for-profit organisations.

The study was completed by Griffith University, Australian National University, University of Sydney and supported by 22 regulatory and professional organisations. The study’s findings identified that “while 90 per cent of organisations had mechanisms to respond to anonymous whistleblowing, only 16 per cent had any policy for ensuring adequate compensation for whistleblowers.”

Typically whistleblowers experience severe reprisal and career disruption highlighting the truth. They have traditionally then ended up before the Fair Work Commission to run a case that was often unwinnable against a major corporation.

The new law changes bring a vast array of new rights for whistleblowers and will potentially make corporations think long and hard before punishing whistleblowers. It’s a step in the right direction and one that could also contribute to improved safety outcomes across organisations…time will tell.