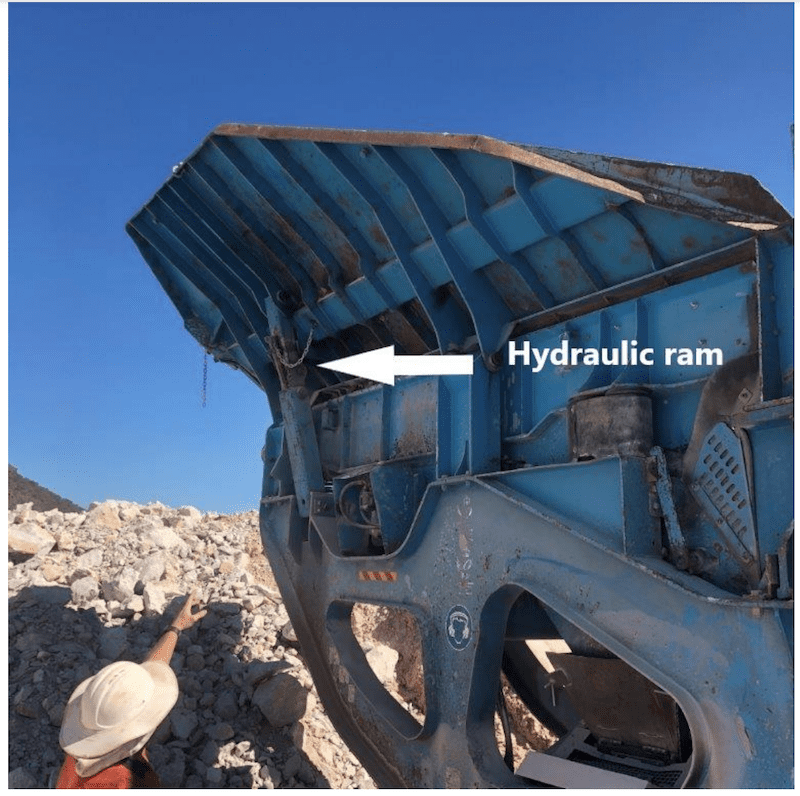 The NSW Resources Regulator has released investigation information regarding a worker who has injured by failed components during mobile jaw crusher maintenance at Buckaroo Mine.

At about 8:30am on 26 February 2021, workers at the quarry were attempting to free a jammed hydraulic ram to lower the wing on a mobile jaw crusher.

The workers connected an 8-millimetre alloy sling grade T80 chain assembly (WLL rated at 3.5 tonne in straight lift) between the excavator and components of the hydraulic ram on the crusher wing.

During the task, the excavator was used to apply a sideways pull force to components of the hydraulic ram.

An uncontrolled release of energy occurred causing the chain assembly and components of the hydraulic ram to fail and a worker to sustain a serious injury.

At the time of the incident, the injured worker is reported to have been located underneath the hopper operating the hydraulic controls of the mobile crusher. The worker was transported to the Mudgee Hospital for treatment.

The NSW Resources Regulator has commenced an investigation to determine the cause and circumstances of the incident. The investigation is also examining alleged offences against an inspector by a quarry employee and compliance with requirements for safe storage and handling of explosives.

Mine operators are reminded of their duty to identify hazards and manage risks to health and safety associated with the uncontrolled release of energy and lifting components.

Risk assessment processes that consider and apply risk controls in accordance with the hierarchy of controls must be undertaken, in consultation with all workers, prior to commencing unusual or infrequent work tasks.

When planning tasks involving lifting equipment, the WLL rating of the chain assembly and maximum pull/lift force (including potential for shock loading forces) that could be applied to the chain assembly, including a selection of connection points, must be considered in a pull/lift system design.

Mine operators and workers must ensure safe standing zones are identified and established to account for potential component failure in the work system.