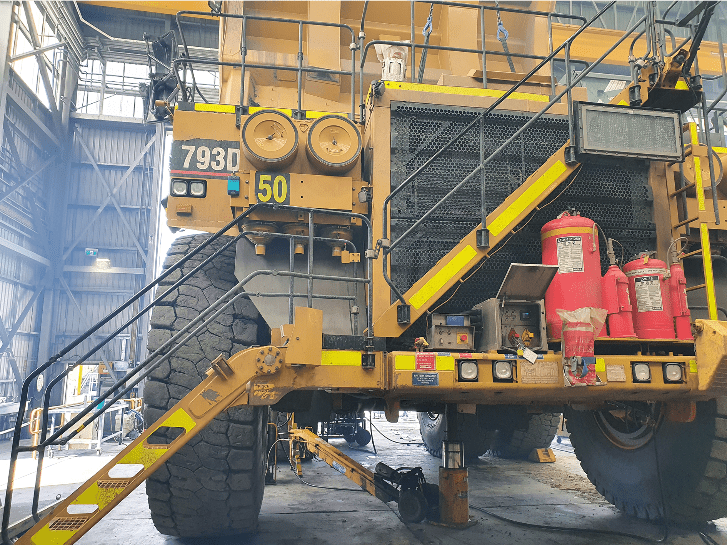 The NSW Resources Regulator has reported an incident where a mine fitter received severe injuries at an open cut coal mine.

According to the report, a maintenance fitter received a severe laceration to his left cheek while removing a cross-member from the engine bay of a haul truck. Two fitters were removing the cross-member by jacking from below and lifting with a crane. The injured worker was reportedly moving electrical cables from the path of the cross-member when it came loose. The tension applied by the slings, combined with the pressure from the jack, allowed the cross-member to rise up quickly and strike the fitter. The incorrect procedure was being used for the task.

The Regulator said: “mechanical engineering control plans must set out the control measures for risks associated with the unintended release of mechanical energy by considering safe work systems for people dealing with plant or structures. Mine operators should review how workers and supervisors are trained to recognise the potential hazards associated with all energy sources, including the load introduced by lifting equipment on the plant. This is especially important when there is the potential for stored energy to be released without warning.”

The NSW Resources Regulator has released investigation information regarding a worker who has injured by failed components during mobile jaw crusher maintenance at Buckaroo Mine.

At about 8:30am on 26 February 2021, workers at the quarry were attempting to free a jammed hydraulic ram to lower the wing on a mobile jaw crusher.

The workers connected an 8-millimetre alloy sling grade T80 chain assembly (WLL rated at 3.5 tonne in straight lift) between the excavator and components of the hydraulic ram on the crusher wing.

During the task, the excavator was used to apply a sideways pull force to components of the hydraulic ram.

An uncontrolled release of energy occurred causing the chain assembly and components of the hydraulic ram to fail and a worker to sustain a serious injury.

At the time of the incident, the injured worker is reported to have been located underneath the hopper operating the hydraulic controls of the mobile crusher. The worker was transported to the Mudgee Hospital for treatment.

The NSW Resources Regulator has commenced an investigation to determine the cause and circumstances of the incident. The investigation is also examining alleged offences against an inspector by a quarry employee and compliance with requirements for safe storage and handling of explosives.