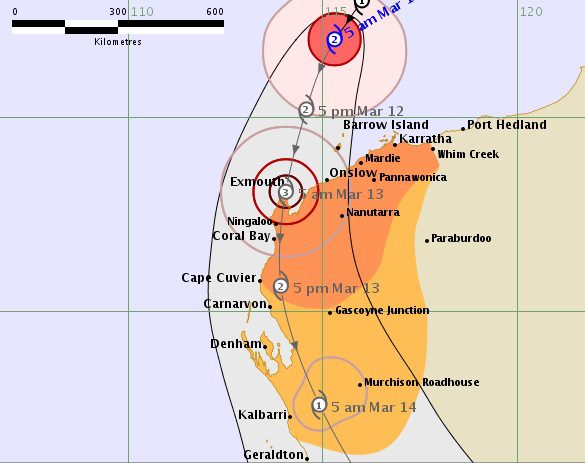 Workers are being evacuated from offshore oil and gas rigs off the Pilbara coast of Western Australia as the north of the state prepares for the onslaught of Tropical Cyclone Olwyn.

Advice from the Bureau of Meteorology issued at 5.55am this morning said the cyclone was currently rated as a Category 2, but could intensify into a severe topical cyclone as it neared the Pilbara coast early tomorrow (Friday) morning. At this stage the Bureau expects the cyclone to make landfall somewhere near Exmouth.

A gale warning has been issued for coastal areas from Whim Creek to Cape Cuvier including Karratha and Exmouth and extending to inland parts of the west Pilbara and northwest Gascoyne.

Heavy rain and squally winds can be expected in southern parts of Western Australia after the system crosses the coast tomorrow.

According to the ABC, Apace Energy started evacuating non-essential staff from its offshore operations yesterday.

Spokespeople from Rio Tinto and BHP, who operate mines in the Pilbara region, said they were “monitoring the situation”, and were making preparations, in consultation with local authorities, for the anticipated wild weather event.

At this stage Port Headland is not expected to be greatly affected by the cyclonic activity, however the Pilbara Ports Authority is clearing all large vessels from Dampier and Ashburton